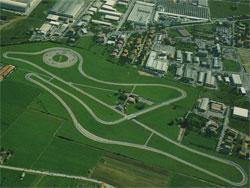 The circuit of Fiorano was commissioned in 1972 by mister Enzo Ferrari near the Maranello establishment. It is the private track owned by Ferrari for development and testing purposes and is used to test engines and to perform trainings of both drivers, mechanics and teams.

Since it is a testing track, it differs from the circuits which host competitions since no spectators are allowed and only a car at a time can perform tests. However, fans can watch the tests from the roadside, which is the closest point at which the track is viewable at the public.
Although Fiorano's circuit shares borders with two national roads and is provided with modern facilities and technical equipments, it perfectly integrates with the surrounding landscape, thus avoiding a strong environmental impact.

The minimum width of the track is 8,40 metres, whereas total length is 3021 metres (in 1992 a 21-metre-long chicane was added). It is a winding circuit, rich in bends which allow pilots to test the car and assess its response in case of danger. Average lap speed is 160 km/h, while top speed is over 290 km/h.

The pit includes a checkpoint room provided with timing and telemetry. The circuit is equipped with fire engine, ambulance and other services and facilities, such as a machine shop, an arrival yard and a special area to welcome cars, the head office and a lodge. Thanks to its peculiar features, this circuit is used to test chassis before low-speed competitions, such as Monaco and Budapest (Hungaroring).