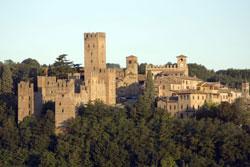 Idyllically set on the left bank of the river Arda, Castell’Arquato dominates Piacenza's sweet hills. Situated 30 kilometres far from Piacenza, its beautiful old town still retains original Medieval patterns, even if the sandstone rocks used to build it date back to previous ages.

Both parapets and walls feature fossils and other Prehistoric evidences whose origins date back to 5 million years ago, when the sea completely submerged the Po Valley, thus creating the so-called Pliocene Plain.

Even Leonardo da Vinci was struck by this oustanding phenomenon. Geologists, researchers and visitors can gain further information visiting G. Cortesi Geologic Museum, which hosts the remains of the whale of Castell’Arquato, discovered in the 30s in the gullies around the city centre. Castell’Arquato is a fundamental stage of the itinerary which leads across Piacenza's Geologic Natural Reserve, which was established in 1995.

The Medieval buildings of Castell’Arquato, which still retain their original aspect, were commissioned by the different families who ruled here, such as the Visconti family, that ordered the famous Visconti Fortress. Designed as a military barracks, it is the seat of the Museum of the Fortress, which reconstructs the history of the building and illustrates the main Medieval military strategies and the history of Castell’Arquato itself through videos and multimedia projects.

Castell’Arquato abounds in historical buildings. The tour of the old town could start from the town's main square, which is dominated by two buildings where the main powers were wielded during the Middle Ages: the Collegiate Church of St. Maria Assunta, the symbol of the spiritual power, and the Palace of the Podestà, the seat of the civil power. The Collegiate Church was erected between 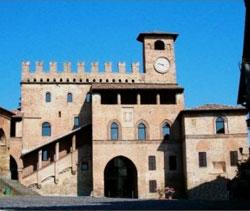 1117 and 1122 over the remains of an ancient parish church. This Romanesque building is one of the most representative architectural masterpieces of the region; both the portal and its stone small arches still retain their original aspect and the interior cherishes capitals and sculptures dating back to the same period. Crossing the beautiful cloister dating back to the end of the XIII century, visitors will reach the Museum of the Collegiate Church, which contains marbles provided with Medieval inscriptions, sculptures and paintings dating back to different ages. Among the most recent works of art is a nineteenth-century painting by Gaspare Landi from Piacenza.

The Palace of the Podestà dates back to 1292, although it subsequently underwent further restoration works. The outer staircase was part of the original project, while the so-called “Loggia dei Notari” (Loggia of the Notaries) dates back to '400. The loggia is the current seat of the Municipal wine cellar. In the ancient rooms of the wine cellar it is possible to taste the fine wines produced by the 18 wineries which manufacture DOC wines in Piacenza, as well as to buy local products or gain information about the regional food and wine itineraries and the Wine Route.

The small trattorias situated in the city centre give tourists the possibility to taste the traditional speciality from Castell'Arquato: the “alvei”, homemade stuffed pasta made into broth. The artisan cake of Vigolo Marchese, a small hamlet of Castell’Arquato, is the most characteristic one in the area. Similar to a chocolate tart, its recipe is wrapped up in a mystery and is handed on by few privileged people.
Interesting events not to be missed in Castell’Arquato are the Medieval dinner, Arquato Jazz Festival and the Festival of the Street Artists.