Maranello, the city of Ferrari 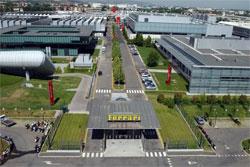 A lively city where the plain and the Apennines merge in pleasant harmony, Maranello is surrounded by charming hills crossed by historic streets which gaze across the countryside from on high. Crowned by enchanting landscapes, it offers visitors the possibility to taste traditional local specialities.

The name Maranello derives from the fact the city was originally settled by a family from Marano (a small municipality situated south), the Araldini or Arardini family, that settled here and commissioned the building of an impressive castle. After the heartquake of 1501, the castle was almost fully restored and it is still possible to admire it walking down the streets of the charming old town.

The houses situated around the castle form the pretty village of Maranello vecchio. After many vicissitudes, in 1936 the castle was bought by professor Giuseppe Graziosi, a famous painter and sculptur who lived and worked here. The castle is currently owned by private citizens.

The name Maranello is strictly connected with Ferrari brand, the most prestigious car manufacturer of Formula 1 races, which is based here.

A short distance from the establishments and the track is Galleria Ferrari, which was built to celebrate its founder Enzo Ferrari. The stories of Ferrari and Maranello have been inextricably linked for more than 50 years. Enzo Ferrari never intended to produce road cars when he formed Scuderia Ferrari as a sponsor for amateur drivers. Ferrari prepared and successfully raced various drivers in Alfa Romeo cars and for this reason it was officially hired by Alfa to head their racing department. During the war, the Scuderia briefly became Auto Avio Costruzioni and operated from the traditional seat of the Scuderia Ferrari in Via Trento e Trieste in Modena. In 1943 the Ferrari factory moved to Maranello, where it has remained ever since.

Enzo Ferrari chose Maranello because he already owned a farmhouse and some plots of land there. Although dictated by the war, the decentralization was welcomed with pleasure by Ferrari, who considered it a good opportunity to start building race cars. The area where he had established the seat of Scuderia Ferrari in Modena in 1923 was a suburban one (only occupied by some stables for draught horses) but in the early 40s it was becoming a central one, as evidenced by the fact that it is currently situated next to the central Piazza Garibaldi.

Ferrari had understood that it would have been difficult to enlarge his establishment beyond the extension works he had already performed acquiring the nearby small plots of land. The only decision he had to made was the one concerning the place to choose in leaving the city centre. Maranello could be defined a "second choice", since he had previosly chosen a territory in the nearby municipality of Formigine. But transactions never came to an end and Ferrari, supported by the Podestà of Maranello Giuseppe Ferrari Amorotti, was informed 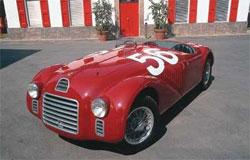 of the possibility to buy a territory in Maranello situated next to the one he already owned, the so-called "Fondo Cavani" owned by Dante Colombini and Augusta Bertani: it was their daughter Fernanda which gave us all the necessary information to make us trace the whole of the story back to its origins.

Two meetings occurred in order to establish financial details and, upon completion of the works, the transaction was concluded with a handshake and a dinner prepared by Augusta, according to the usages and customs of the country gentlemen.

The transaction occurred before the end of November 1942: on November 30, on the headed notepaper of the firm Auto Avio Costruzioni Scuderia Ferrari of Modena, and on December 3, on a 6-lira stamped paper, Enzo Ferrari presented his first request of planning permission to the podestà of Maranello in order to built a metallic warehouse in his property, the "Fondo Cavani". The Podestà granted him the authorization on December 4, allowing him to start establishing the firm which was about to become the current industry.

Originally the establishment was not a mechanical industry (as in Modena) properly, but a farm instead, as evidenced by a subsequent request dated January 12, 1943, where all the territories included in the farm were listed. These territories included Fontanile, Convoglio, Nuovo, San Martino and Cavani properties, boasting a total extension of 108 "biolche modenesi" (a local unit of measurement corresponding to 2836 m2).