Sestola, situated just in the heart of Emilia-Romagna, in the province of Modena, overlooks the valleys of the rivers Leo and Scoltenna and is the capital city of Mount Cimone District, as well as a renowned tourist centre for the lovers of both winter sports and excursions.

One of the most important attractions of the city is the monumental complex which develops around the 8th-century fortress. It is made up of several buildings which belong either to the “village”, that is to say the military area, or to the Fortress, the seat of administrative and governmental offices.

Worthy visiting are also Palazzina del Comandante, the XII-century oratory of St. Nicola and the Clock Tower dating back to 1572. The most important tourist resort of the area is situated just in the heart of the Park of Frignano. 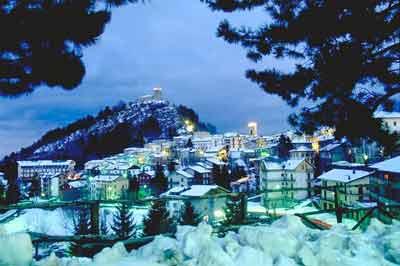 Sestola and Mount Cimone District are the most important winter resorts of the Modena Apennines and some of the most appreciated circuits in Italy, since they gather 50 km of ski slopes.

Provided with modern ski-lift facilities which are easily accessible through a single skipass, they are always covered with a thick mantle of snow since they undergo constant artificial snow-making.

The area hosts equipped facilities for the lovers of snowboarding and cross-county skiing, as well as an Olympic indoor ice rink

Sestola boasts a wide range of attractions: apart from the Fortress, it hosts the Museum of the mechanical musical instruments and that of the peasant society, as well as plenty of interesting villages and churches. It is the ideal place to go for naturalistic walks, trekking, riding and cycling and to perform sports fishing, hang-gliding and paragliding. Not to be missed is the traditional lancio del Ruzzolone, once perfomed throwing wholes of cheese and now played by means of wooden discs.

Other interesting spots are Esperia botanical garden, Lake Ninfa and numerous archaeological sites. Passo del Lupo makes the ideal base for going for exciting walks and excursions. It is situated 1.500 metres above sea level bordering the Regional Park of Frignano and is easily accessible by cableway.

Sestola also hosts a Meteorological Observatory dealing with air pollution and is an important environmental centre stretching from the valley of the stream Scoltenna (321 m.) to the top of Mount Cimone (2.165 m.).
Down in the valley (1.020 m) is rio Vesale, which is flanked by the small hamlets of Casine, Castellaro, Rocchetta Sandri, Roncoscaglia, Vesale and Poggioraso. The lower area of the district hosts the tourist resorts of Pian del Falco, Passo del Lupo and Lake Ninfa, the seat of important environmental centres, such as the oasis of the Esperia Garden.

In the neighbourhoods of the town are two well-equipped parks, Roncacci, which extends from Sestola up to Pian del Falco, and Fratta, which stretches from the Castle up to the borders of the district. Other outstanding environmental areas are Far West, which gathers the impressive rock spurs situated south of Mount Cervarola, Sasso della Capra in Pian Cavallaro, Sassatelli near Vesale and some natural caves.

Not to be missed are the rural village of Fontanaccia in Castellaro and the important Romanesque oratory of St. Biagio in Roncoscaglia.