Imola, an ancient city situated halfway between Bologna and the province of Forlì and Cesena, is regarded to be the western gate to Romagna and is one of the most important trading and cultural centres in the region. The symbol of the city is Enzo and Dino Ferrari International Circuit, which made it famous all over the world.

The circuit, which has hosted both car and motorcycle racings for many years, is named after Dino and Enzo Ferrari, the founders of the famous Maranello's car industry. The project of the circuit, designed in the late 40s, originally dealt with the building of a road link between the via Aemilia and Codrignano, but it subsequently expanded to include the building of a car circuit.

The first test of the track was carried out in 1950 by Alberto Ascari who drove a car and Umberto Massetti who rode a motorcycle; the inauguration of the circuit took place 3 years later with the first official racing of the moto GP Italian championship. The first car race took place in the following year (1954) and gathered cars belonging to the sport category; drivers from Ferrari and Maserati achieved the best results. The first Formula 1 race took place in 1963.

Although not valid for the Italian championship, it achieved huge 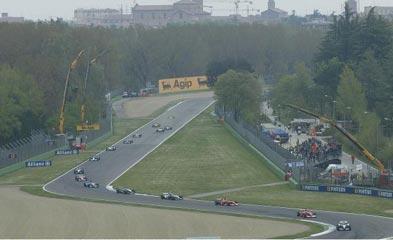 success notwithstanding some organizational problems. In 1980 the first official Formula 1 car race took place here. Since then, the circuit has been the official venue for the Grand Prix of San Marino.

The history of the circuit is also sadly known for the tragic events which occurred here: the most dramatic one took place during the GP of 1994, when during the 3 days of trials and competitions 3 serious accidents occurred and the great Brazilian Champion Ayrton Senna was killed. After these events, the circuit underwent deep renovation works: the famous Tamburello corner where Senna died was reduced to a chicane and the Villeneuve corner was replaced by two sweeper corners; even the historic Rivazza and Variante Bassa corners were replaced.

Imola's international circuit hosted the Grand Prix of San Marino until 2006, but it was excluded from the GP of the year 2007 due to its failure to comply with the directions dictated by the League at the beginning of the championship.

Thanks to a new management, the circuit was reopened and inaugurated in May 2008 and it is currently hosting the Formula 1 Grand Prix of San Marino. It is also the venue for some motorcycle racings, the FIA WTCC Tourism World Championship and the Heineken Jammin' Festival.

The facilty does not include the track only: around the circuit is the park of the Mineral Waters, 11 hectares of lush vegetation crowned by the monument raised to celebrate Senna. Not to be missed is the CRAME Exchange Exhibition, where it is possible to exchange both motorcyles and cars.