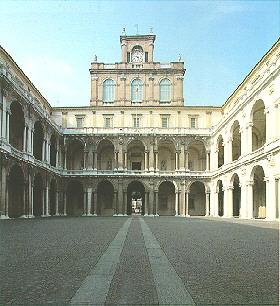 Built in 1634, the palace has been the seat of the Estense Court for more than two centuries. Its facade, designed by Bartolomeo Avanzini, is made up of three series of windows provided with double cornices situated between two corner towers. The central tower is lightened by the raising of both the three-arched loggia and the clock tower.

The two sides of the portal are embellished by the statues of Hercules and Emilio Lepido by Prospero Sogari, as well as by numerous columns which support the balcony. The upper balcony of the palace cherishes late-Mannerist and Baroque statues depicting mythological gods, which contribute to give the whole building a light atmosphere.

The Honour Courtyard leads to the so-called Apartment of Princes, the Private Apartment (the seat of the Historic Museum of the Academy) and the State Apartment, where it is possible to admire a rich art gallery cherishing the portraits of all the members of the Este family. Among the most fascinating rooms, not to be missed are the sumptuous Honour Hall and the eigteenth-century Golden Hall, where Francis IV is said to have signed the death sentence of Ciro Menotti, the leader of the unlucky revolts of 1831. The building has hosted the Military Academy since 1862: the young officials of the Italian army are trained here.