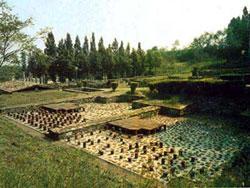 Situated in the province of Piacenza and located 460 metres above sea level, the ancient Velleia Romana is often regarded to be the Northern Pompei because of its outstanding finds dating back to the period when the city was a Roman municipium and of the important administrative role it played across the area including Piacenza, Parma, Libarna and Lucca. Velleia, whose name derives from that of the Veleates or Veliates Ligurian people, is easily accessible from Piacenza and the surrounding resorts.

Apart from being an important administrative centre, Velleia soon became an appreciated spa resort where Roman consuls spent their holidays to take advantage of the beneficial properties carried out by its springs of salty waters, as well as to enjoy the beauty of the surrounding hilly landscape. These elements all contributed to create the high standards of living local inhabitants experienced; according to a census carried out by Emperor Vespasian in 72 AD, the city hosted several ultracentenarians.

The golden age of Velleia started in 42 AD, when the ancient centre became a free city-republic and was given the Roman citizenship. Based on the numerous finds which were unearthed here, however, Velleia experienced utmost prosperity up to the III century AD and inexorably declined in the V century AD, when it seemed to sink into oblivion.

In 1760, the first excavation works commissioned here by the Duke of Parma, Piacenza and Guastalla, Don Filippo di Borbone, brought to light the ruins of Velleia, thus revealing the leading role the city had played in ancient times and celebrating it as an important archaeological site. As long ago as 1746, following the subsidence of a small portion of terrain, the parish priest of Macinesso made the first archaeological finding, thus boosting subsequently excavations. The parish priest brought to light the Tabula Alimentaria Traiana, the largest bronze artifact ever found (3x1,5 metres) provided with inscriptions dating back to the Roman period, which was subsequently dismantled and dispersed like other important finds which were later stolen or melted into furnaces.

The historic vicissitudes which characterized the ancient Roman municipium are still able to catch the attention of tourists who flock here and are handed on by the impressive remains the site cherishes. A tour of Velleia gives tourists the opportunity to discover finds of great 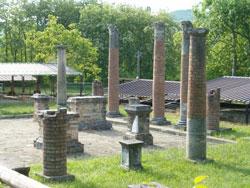 value, distributed on several terrace-like planimetries situated along the so-called “Pendio Boreale del Poggio” (Poggio Northern Hill), on the slopes of Mounts Rovinasso and Morìa. It is believed that the slow decline of the once flourishing community of Velleia was due to the frequent subsidences and landslides which have characterized the territory from then on.

An excursion across Velleia gives tourists the opportunity to visit the remains of the original urban complex and its forum, which still retains sandstone pavements, thermae, urban settlement, basilica (an aiseless church built on a rectangular plan which cherished the famous Tabula Alimentaria) and the remains of an ancient circular building which is said to have been built as a water tank.

An Antiquarium cherishes the Tavola Alimentaria Traiana and the bronze artifact bearing the famous lex de Gallia Cisalpina. Here are some sepulchral items, as well as ancient furnishings and fittings.
To visit Velleia during summer gives visitors the opportunity to attend theatrical performances while enjoying outstanding views over the surrounding remains.