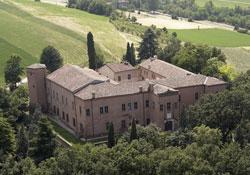 Together with the nearby Sassuolo, the charming municipality of Fiorano Modenese is the national leader in the field of the industrial production of ceramic and building materials.

The Councillorship for Cultural Policies of Fiorano conceived a ceramic-based project, the so-called Manodopera. The project is aimed at celebrating the job of the artisans who have been manufacturing ceramic for a long time, while promoting this high-quality sector all over Italy. Manodopera is hosted inside a hall of the Museum of Ceramic, which offers precious insights into the evolution of the tools which have been used to manufacture ceramic since the Neolithic (tools, materials and kilns).

Not to be missed in Fiorano is the Castle of Spezzano, which was acquired by the municipality in 1982. The castle still retains the Medieval fascination of a simple building. The only gate is situated north, near the fourteenth-century tower provided with drawbridge. The largest hall of the building, the Hall of Views, hosts 57 paintings portraying marvellous views of castles, lovely towns and villages which belong to the State of the Pio of Savoy. The floor dedicated to the nobles hosts the Gallery of Battles, which cherishes an interesting fresco cycle realized between 1509 and 1512 to celebrate the epic deeds of Alfonso I, Duke of Ferrara, Modena and Reggio.

Inside the walls is a pentagonal tower which provides access to dark prisons shielding graffiti and engravings left by prisoners. The upper floors host the Municipal Vinegar Cellar, which still retains the original furnishings and stores three sets of Modena's famous Balsamic Vinegar.

The Sanctuary of Beata Vergine del Castello gazes across the countryside from on high. Built in 1634, it was designed to host the painting of the Virgin Mary which was once engraved in the main gate of the castle of Fiorano. The castle was destroyed by fire in 1558 and only the Virgin's portrait withstood. The sanctuary is situated where the castle once stood and legend has it that Fiorano's citizens promised the Virgin Mary they would have built a castle if she saved them from plague.

Fiorano Modenese is also known for a particular geologic phenomenon, the so-called mud volcanos. The Natural Reserve of Nirano's Mud Volcanos, which is set just in the heart of an hilly landscape situated 150-300 metres above sea level, offers visitors the opportunity to go for pleasant walks across charming footpaths surrounded by eerie wastes of lunar landscapes.

They will also have the opportunity to hear the mumbling of gas bubbles and admire the small mud volcanos created by both subterranean clays and the erosive action of rain. Near the higher volcanos is a rare species of graminaceous plant, Puccinellia borreri, which grows only in dry and salted soils.