Italy in Miniature is one of the best theme parks in the Romagna Riviera and perhaps one of the most unique in Italy. Located in Viserba, just a few kilometres from the centre of Rimini, Italy in Miniature now offers its visitors a wide range of attractions, first and foremost the faithful reproductions of some of the main monuments and places of historical and artistic interest in Italy. Placed in an area of the Park of around 85,000 square meters shaped like a boot, there are over 270 miniatures reproducing the beauty of our country, mostly in scale 1:25 and 1:50.

This wonderful theme park inaugurated in July 1970. Initially there were 50 miniatures which deeply amazed the few visitors at the time. 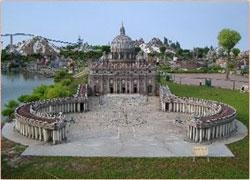 The care and skill with which these miniatures are made is the result of skilful and rigorous research and design work through which each single reproduction acquires shape, colour and even a similar condition of wear and tear as the original.

Walking along the streets of Italy in Miniature, visitors will be able to admire all the details of these small works of art, once created exclusively by master craftsmen, which are now made with the help of more advanced technologies.

A visit to Italy in Miniature is highly recommended to those who wish to see with their own eyes St.Peter’s Basilica (reproduced in miniature without altering its majesty), the Trevi fountain (known worldwide and featured in Fellini’s classic film La Dolce Vita), the Duomo of Milan (a splendid example of Gothic architecture), Piazza del Plebiscito in Naples with the magnificent buildings that surround it, and also the port of Genoa, the monumental Verona Arena, Agrigento’s Valley of the Temples, the nuraghic village of Barumini in Sardinia, as well as the Alps and some of the most beautiful monuments in Europe and much more.

Venice, for example, with its Grand Canal, virtually identical to the original but five times smaller, can be admired aboard a boat to explore its every corner, just as you would if you were in the real Venice. Created in 1992, little Venice now features 119 buildings created over a period of 9 years.

Italy in Miniature and Europe in miniature, the first reproductions made in the theme park located in Viserba (Rimini) are currently placed alongside numerous other attractions such as the Science Fun Fair, Pinocchio, the interactive Driving School and the Pappamondo, each with different characteristics but with the same recreational and educational purpose, for visitors to learn while having fun.

For the purpose of fun, Italy in Miniature features a water ride called the ‘Canoe’, the breathtaking Sliding Shot, an enormous mechanical catapult that will shoot you to a height of 55 meters in less than 2 seconds, the Cannonacqua for water battles and much more. During your visit to Italy in Miniature, we also recommend a nice ride on the Monorotaia (monorail), the first built in Europe, which runs through the park at 6 meters above the ground and offers great views of the entire place. You can get even higher on the Panoramic Tower when climbing aboard one of its many hot air balloons which turn around and rise up to a height of 10 meters providing unique views of the park and its surroundings.

Do not miss the shows and numerous fun-filled events held throughout the season, often accompanied by Emme, the park’s friendly mascot, which provide moments of fun and entertainment to both adults and children.

We recommend that you allow a full day for your visit so that you can also take a few breaks and relax in the many grassy areas which surround the park, or to stop in the various food courts and picnic areas where you can have a snack before heading back to exploring the rest of the attractions. There are also several shops where you can buy souvenirs, local products and many fun items to give as gifts.

Italy in Miniature has a new array of attractions such as the YouMini, which allows visitors to get a nice miniature version of themselves, the Playstation area, to try the most exciting games on the Playstation 3, and the Venturer Simulator.