Situated halfway between Bologna (75 km) and Modena (60 km), Fanano is the largest municipality in the Higher Frignano, part of the Regional Park of the Higher Modena Apennines.

Situated at the confluence of the streams Fellicarolo and Scoltenna, the surrounding area is an enchanting rural patchwork of large grasslands, enchanting waterways and impressive waterfalls.

Fanano has been settled since ancient times. Its name was firstly mentioned in the 8th century and 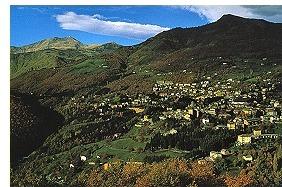 derives from "Fannianus", a distortion of the masculine name Fannius. The foundation of the city could therefore date back to 176 B.C., when the Romans defeated the warlike local populations.

The current city centre cherishes interesting evidences dating back to different ages: the church of St. Silvestro, which was founded in the 8th century by the Benedictine friar St. Anselmo, the 17th-century Town Hall, the ancient Tower of Poggiolo, which dates back to the Feudal Age, Palazzo Lardi, which was built in 1340 to host the Infantry Corps, the seventeenth-century Clock Tower, Palazzo Monari, which was built in 1510 making use of the local stones according to the sixteenth-century architectural style, and Palazzo Coppi, which drew inspiration from the seventeenth-century Tuscan style.

Piazza Corsini is the pivotal point of the vast surrounding area. The heart of the ancient settlement, it is crowned by a beautiful fountain and characterized by a stone situated just in its centre. Legend has it that anybody walking on it will be lucky and will enjoy the town very much. Piazza Ottonelli hosts two 15th-century towers belonging to the ancient Fortress.

The streets and squares of Fanano and the surrounding areas are embellished by stone works of art realized by artists from all over the world. This great passion for sculpture is celebrated during the International Symposium of Stone Sculpture.

Not to be missed are the numerous sports opportunities offered by this lovely village nestling at the foot of Modena Apennines: a well-equipped gym, a swimming pool, modern football pitches, a tennis court and many cycle itineraries. In winter, Fanano offers the lovers of winter sports the possibility to take advantage of a wonderful indoor ice rink and of modern skiing facilities.