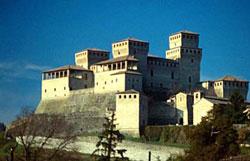 The castle was mentioned for the first time in a document dating back to 1259, where the Podestà of Parma ordered its demolition, and for the second time in another deed which forbade its rebuilding. The current castle was built between 1448 and 1460 by Count Pier Maria Rossi to suit defensive purposes, even if it is best known since it was the residence of the Count and his lover, Bianca Pellegrini da Arluno.

The plan of the castle is rectangular and its four towers are connected with the ghibellina, that is to say the highest tower, by means of impressive merloned walls. The inner rooms bear fantastic names according to the frescos they cherish: the Jupiter Room, the Room of the Pergola, the Room of the Landscapes, the Room of the Velarium, the Room of the Victory and the Room of the Jugglers are decorated with masterpieces by Cesare Baglione, who worked here together with his pupils in the late XVI century. The naturalistic decorations which embellish these rooms date back to the XVIII century. Both the Room of the Angels and the Room of the Coats of Arm feature the coats of arm of the Lords who ruled here during that Age, the Sforza of St. Fiora and the Rossi family. The decorations of the dining room feature geographical patterns and gave guests who gahered here the opportunity to start interesting debates.

On the ground floor is the Oratory of St. Nicomede, the ancient location of the small

wooden tribune which was later given to the Museum of the Sforza Castle in Milan. The oratory boasts the tombs where the Count and his lover are said to have been buried.
Even those who subsequently inhabited the castle left indelible marks, such as the outstanding kitchen utensils left by the cardinal who lived here in the following century. The story of the dukes who subsequently lived here is even more fascinating. Legend has it that the Duchess was walled up alive in a wall of the castle, and the ghost of a beautiful woman with long, black hair and green eyes still wanders about its rooms during the nights of full moon looking for a passionate lover to kiss.

Mild climate, sweet vine-clad slopes, charming villages and romantic legends made producer Richard Donner choose that castle as the setting of the fantasy movie Ladyhawke, performed by Michelle Pfeiffer, Matthew Broderick and Rutger Hauer. Those who decide to spend their holidays at the Castle of Torrechiara during summer can also participate in a wide array of music events, such as Renata Tebaldi Torrechiara Festival.