Ferrara is one of the most representative examples of Renaissance city and is therefore regarded to be the first modern city to be founded in Europe. The fine architectural masterpieces Ferrara cherishes allowed the city to join the list of UNESCO World Heritage Sites.

The history of Ferrara, as well as that of its urban patterns and artistic masterpieces, is strictly interwoven with the vicissitudes experienced by the Este family, the Lords of Ferrara who ruled the city from the mid ‘200 up to the late ‘500. During that age, the city turned into a lively and thriving cultural and artistic centre where modern Renaissance patterns perfectly integrated with the existing Medieval ones. To visit Ferrara gives people the opportunity to enjoy its past fascination, which was celebrated by the XX-century metaphysical paintings by Giorgio de Chirico, Filippo de Pisis and Carlo Carrà.

The “Woman of the River Po”, as Torquato Tasso once defined his native town, extends across the marshes of the Po Valley, where the river Po approaches the Adriatic Sea, and still retains its original beauty due to the impressive land reclamations the Lords and Popes who ruled the city commissioned here. 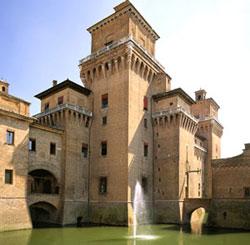 The most prominent building is the square Estense Castle, a brick structure made up of four towers and  surrounded by a moat which was erected in 1385. From the inner courtyard it is possible to reach the rooms, which cherish precious frescos dating back to ‘500.
Crossing Piazza della Repubblica, tourists will reach the first residence of the Este Dukes, a XIII-century building which currently hosts the Town Hall. The building, which underwent extensive restoration works, still retains some windows and an outer staircase dating back to the Renaissance, while the small arch to the right was realized by Leon Battista Alberti, a fifteenth-century emblematic and many-sided architect who also designed the bell tower of the Duomo, an impressive building realized in pink and white marble. Apart from the bell tower, the outer part of the cathedral still retains its original Romanesque-Gothic structure, featuring a sumptuous facade with three cusps and a series of loggias. The semi-circular apse was designed by Biagio Rossetti, an architect working at the court of the Estensi family, and is surmounted by the large fresco of the Last Judgement by Bastianino (1580), which draws inspiration from the famous one by Michelangelo. The side chapels host important paintings by Guercino, Garofalo and Francesco Francia. The nearby Museum of the Cathedral cherishes masterpieces by Cosmè Tura, the founder of the School of Ferrara, Jacopo dalla Quercia, Camillo Filippi and the Flemish painter Johannes Karcher.

Heading north and leaving the castle and cathedral behind, tourists will reach Cors 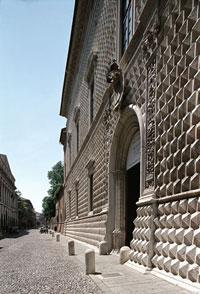 o Ercole d’Este and Palazzo dei Diamanti (Diamond Palace), whose name derives from the diamond rustication which covers the outer walls. The fifteenth-century palace, commissioned by Sigismondo D’Este and realized by Biagio Rossetti, is one of the most representative symbols of the city. It is the seat of the National Art Gallery, which contains works from leading exponents of the local Renaissance school, and the Civic Gallery of Modern Art, which every year hosts at least four important exhibitions of contemporary art. Behind Palazzo dei Diamanti is Palazzo Massari, which cherishes a rich collection of paintings by Filippo de Pisis from Ferrara (1896-1956). Its courtyard is home to PAC (PCA, Pavilion of Contemporary Art), which hosts temporary exhibitions displaying outstanding works of art by international artists.

Tourists in Ferrara can combine the visit to museums, buildings and places of worship with pleasant walks along the streets of the city centre. The south-eastern area is scattered with picturesque Medieval districts gathering ancient narrow streets which still retain their original aspect. This area is dominated by Corso della Giovecca, the most lively street of the city which is surrounded by many interesting buildings, such as Palazzina di Marfisa (Marfisa Palace), where Marfisa d’Este lived in 1559, and the seventeenth-century Church of Teatini, which cherishes the cycle of frescos by Clemente Majoli and the famous altar-piece by Guercino known as “Purification of the Virgin” (1634).

Not to be missed are excellent restaurants serving local specialities, such as cappelletti or cappellacci filled with pumpkin and the eels of the nearby marshes of Comacchio; numerous pastry shops give visitors the opportunity to taste the famous chocolate panpepato.