Bazzano is situated just across the boundary between the provinces of Bologna and Modena (Rio Muzza originally marked the watershed) and is crossed by the stream Samoggia. This small and charming village still retains ancient traditions: a weekly market, whose origins date back to the fifteenth century, takes place every Saturday in the central Piazza Garibaldi and along the main streets of the city centre.

The hill which dominates the city centre is topped by the Renaissance Bentivoglio Fortress, the seat of numerous cultural activities, the Music Centre and "A. Crespellani" Archaeological Civic Museum, 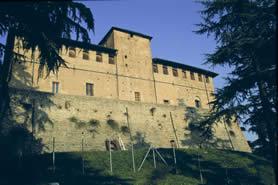 which all contributed to give Bazzano the prestigious recognition of “City of Art”.

The origins of the Fortress date back to the year 1000, when numerous castles and fortresses were built in the surrounding area to suit defensive purposes. In 1038, Bishop Guiberto of Modena gave the castle and the church of St. Stephen to Marchese Bonifacio di Canossa, the father of Matilde, who in turn inherited it at the age of nine years.

When Matilde died heirless, the castle was returned to the city of Modena. The first walls of the fortress were built in 1218. In the thirteenth century, the Fortress was besieged by Bologna twice: in 1228, when the city did not succed, and in 1247, when it treacherously stormed and destroyed the fortress to bring its stones to Monteveglio and use them to build a tower for the officials of the village.

The fortress was later rebuilt by Azzo VIII d'Este between 1296 and 1311. In 1317, even the keep situated over the gates to the town, the current clock tower, was rebuilt. After 1371, Marchesi d'Este enlarged the walls of the Fortress (the gate of these new walls is the arch situated few metres under the keep). The southern gate, where vehicles are admitted, dates back to the late '800, the age when the current cemetery was built.

During the Renaissance, Giovanni II Bentivoglio commissioned new works aimed at improving the appearance of the fortress in order to turn it into the summer residence of the court; the large hall of the Giants and its outstanding frescos and the hall of the Cheetahs, which hosts the symbol of the Bentivoglio family, that is to say a cheetah crowned by a pomegranate framework, date back to that period. These works of art, together with the charming village itself, are Bazzano's main attractions.

Thanks to its fine wines, the town is part of the Route of Wines and Tastes “City, Castles, Cherry trees”.
Not to be missed is Autunno Bazzanese (Bazzanese Autumn), which takes place in the first half of the month of September and includes food and wine festivals, concerts, shows and cultural events. It is organized by the Local Tourist Office in collaboration with the Municipality and other local associations.