The itinerary across the places where Giuseppe Verdi lived attracts the lovers of the great Italian composer not only because the places where the great master lived and worked cherish plenty of interesting memorabilia, but also because the tour of the places where his love for music dawned gives visitors the possibility to enjoy the strong impressions Verdi took along in Milan and in all the theatres where he conducted his plays. 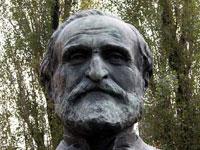 Parma's Royal Theatre cherishes an extensive theatrical documentation concerning the plays Verdi wrote; furthermore, the theatre was the seat of the outstanding performances arranged on the occasion of the so-called Celebrazioni Verdiane (Verdi Celebrations) which took place in 1913 (centenary of his birth) and in 1951 (fiftieth anniversary of his death). The itinerary across the places where Verdi lived does not revolve around the city itself, but leads tourists to Roncole, a small hamlet situated 4,8 kilometres far from Busseto, in the province of Parma. The current name of the village is Roncole Verdi, which was chosen to celebrate its most famous citizen. Visiting the native house of the composer, which still retains the aspect it had two centuries ago, visitors soon realize that the family of Giuseppe Verdi was of humble origins: Luigia Uttini, his mother, was a spinner, while his father, Carlo Verdi, ran a small inn situated downstairs in the same house. The bronze bust depicting the great Master, realized by G.Cantù, was placed in the garden of the house in 1913, on the occasion of the centenary of his birth. A further bronze bust realized by Luigi Secchi was placed in the main square of the town, then called Piazza Giuseppe Verdi.

A short distance from the house is the Church of St. Michele, where Giuseppe Verdi was christened, which cherishes the organ Verdi played in his childhood. He was given his first music lessons by Don Paolo Costa in the presbytery of the Church of Madonna dei Prati, situated 2 km far from Roncole.

However, his proper music education occurred in Palazzo Barezzi, the residence of the well-off Antonio Barezzi, who joined the Bussetana Philharmonic Society in his living room in 1816. He noticed the precocious talent of the son of the host of Roncole, helped him improve and financed his three years of music studies in Milan. Giuseppe Verdi later got married with his daughter, Margherita, but their marriage didn't last long since both Margherita and the children of the couple died soon, thus leaving a deep mark on the composer.

In 1979 Palazzo Barezzi became the seat of the Associazione Amici di Verdi (Association of Verdi's Friends) and since April 10, 2001, the year of the centenary of the death of the great Master, the house has hosted the Museum of Verdi's Memorabilia. To visit the places where Verdi lived, especially Palazzo Barezzi, gives tourists the possibility to make a journey through the life of the great master, as well as to admire portraits and iconographic documents, autograph letters, memorabilia from the Stefanini collection and the ancient Viennese fortepiano (the precursory of the nineteenth-century piano) which Verdi composed The Two Foscaris with (1844).
Giuseppe Verdi and Margherita Berezzi got married in the Collegiate Church of St. Bartolomeo in Busseto, whose originary structure dates back to 1400. The nearby Oratory of Ss. Trinità is another interesting spot to visit, since its apse cherishes the masterpiece by Vincenzo Campi, the Holy Trinity with the Saints Apollonia and Lucia, dating back to 1579.

The Pallavicino Fortress, the thirteenth-century residence of the 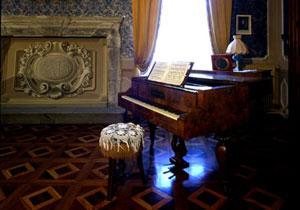 Lords of Busseto, is easily accessible from Piazza Verdi. It became a public property in the late ‘500, was renovated in a Neo-medieval style by Pier Luigi Montecchini between 1857 and 1868 and was then turned into the seat of the Town Hall and Giuseppe Verdi's Theatre. The medallions which hang from the vault of the theatre were decorated by Gioacchino Levi, who embellished them with allegories from Comedies, Tragedies, Melodramas and Romantic Dramas. In 1913 Toscanini conducted a concert here to celebrate the centenary of the birth of Verdi.

In 1845 Giuseppe Verdi bought Palazzo Orlandi, an eigtheenth-century Neoclassical building where he composed important plays, such as Luisa Miller, Stiffelio, Rigoletto and The Troubadour. The palace still cherishes memorabilia and furnishings dating back to the late nineteenth century, the Age when Verdi sold the residence.

Not to be missed in Busseto is Villa Pallavicino, which dates back to the second decade of the XVI century, was later rearranged in a Baroque style and then restored by the Municipality. It hosts the Civic Museum, decorated with late-Baroque and Rococo allegorical stuccos and frescos, which cherishes some Verdi's autographs and the spinet where he learnt the first music rudiments in St. Maria degli Angeli.

The tour across the places where Verdi lived and worked ends along the street which leads to Piacenza in Villanova d’Arda, where Villa Verdi, the last residence the composer bought in 1848, is situated. It still retains the furnishings Verdi chose, as well as his billiard table, his piano, a wide array of ornaments he collected during his journeys, photographs and personal items which help visitors understand the passions and simplicity of a man who defined himself as “a farmer from Roncole”.