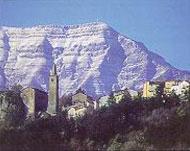 Corno alle Scale is the name of the district which develops around the homonymous 1,945-metre-high mountain. It is situated just in the heart of the Bologna Apennines and includes the three provinces of Pistoia, Bologna and Modena. It is a renowned winter resort thanks to the presence of its outstanding Regional Park featuring unspoiled natural environments and the well-equipped skiing facilities situated in the higher side of the mountain.

Situated halfway between Bologna and Florence, it welcomes people who come from both cities in order to spend pleasant winter holidays here.

There are many differences between the northern and the southern side of the mountain: the northern side features impressive rock spurs, while the north-western and the southern slopes are characterized by an hilly landscape covered with large meadows. Corno alle Scale is crossed by the rivers Lima, Leo, Dardagna and Verdiana and is an ideal holiday destination even in summer, since it offers tourists the possibility to enjoy its green mountainous landscapes while following outstanding natural itineraries.

The city's main attraction is its large ski resort, a huge natural amphitheatre provided with over 36 kilometres of slopes which are easily accessible by means of 2 ski-lifts and 4 chair lifts and are always covered with a thick mantle of snow because of the constant artificial snow-making it undergoes 150 days a year.

Corno alle Scale provides the lovers of Alpine and cross-country skiing plenty of outstanding facilities, and gives snowboarding enthusiasts the possibility to take advantage of rails, jumps and parabolic curves where they can carry out exciting performances. Corno alle Scale also hosts a well-equipped Baby Park provided with plenty of funny blow-up games which are able to suit even children's most demanding requirements. Well-equipped and provided with excellent connections, Corno alle Scale has long been the main training field of Alberto Tomba, as evidenced by two slopes bearing his name.

With its 1,945 metres of altitude, Corno alle Scale is the highest peak of the large Regional Park of Corno alle Scale. On the top of the mountain is a big 15-metre-high metal cross which marks the beginning of the so-called Balzo dell'Oca, the

impressive crag dropping vertically for 1,000 metres which attracts the lovers of extreme sports. The other side of the mountain is characterized by green meadows and hilly landscapes which provide the ideal background to go for long walks in close contact with nature. Furthermore, the lush woods offer unspoiled natural environments to make pleasant excursions or horse rides while enjoying the surrounding breathtaking sceneries.

Apart from modern sports facilities and outstanding natural beauties, Corno alle Scale also boasts small villages where the life of the kind and welcoming local inhabitants still revolves around ancient traditions. The local cuisine is characterized by a mixture of recipes coming from the nearby Emilia and Tuscany. Among the typical ingredients are chestnuts, once the daily meal of mountain dwellers, which are served both grilled and boiled. Their flour is used to prepare pies, pancakes and "ciacci", the latter being made of flour and water and cooked inside an earthenware mould.

Not to be missed are mushrooms and truffles, as well as the game from local woods. Corno alle Scale is a wonderful natural oasis which gives tourists the possibility to experience utmost relax while enjoying lively folk traditions and amazing fun opportunities.