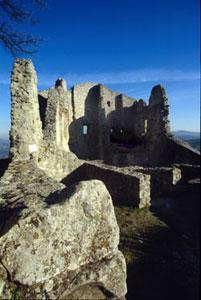 The Courts of Reggio Emilia and the Castles of Matilde di Canossa are 22 castles which are idyllically set amongst ancient villages, towers and parish churches.

The tour of the Castles helps visitors enjoy the fascinating Medieval atmosphere which still permeates them, as well as admire an outstanding well-preserved historic heritage dating back to the year 1000, when the whole territory of Reggio Emilia was inextricably linked with the vicissitudes experienced by the Countess Matilde di Canossa.

Matilde lived between the XI and the XII century and her reign extended from Mantova to Latium, although it had its main centre in Reggio Emilia, in the territory bounded by the municipalities of Canossa, Rossena, Montecchio, Correggio, Novellara, Carpineti, Bianello and Scandiano.

Matilde di Canossa was one of the most important women of the Middle Ages, so much that Dante included her in his Divine Comedy placing her in the Heaven for the fundamental role she played as a mediator between the Reformed Church of Pope Gregory VII and Emperor Henry IV, whose army was defeated in the territories surrounding the Castle of Canossa.

The Castles and Fortresses which currently form the tour of the Castles of Reggio Emilia were then acquired by other families and lords; instead, some of them were bought by municipalities and private individuals which then joined their efforts in order to arrange interesting educational tours.

It is advisable to start the visit of the Castles of Reggio Emilia from the residence of Matilde, the Castle of Canossa, which dates back to the first half of the X century. Otto I, the king of Germany, gave it to a Lombard descendant of the family of Matilde, thus promoting the passage of his descent to the status of earls. The castle of Canossa played a fundamental role in European history, since it was the seat of the meeting between Pope Gregory VII and Emperor Henry IV.

After the death of the countess, the castle experienced a relentless decline; in 1557 Ottavio Farnese and his army destroyed it through cannon shots and it was only in 1878 that the remains of the castle were bought by the State and declared national monument. Evidences dating back to the original structure can still be admired in the southern walls and the crypt of St. Apollonio. The National Museum of Canossa provides informative material and displays interesting finds dating back to the ancient history of the castle, among which not to be missed is the XII-century font.

The Castle of Canossa was protected west by an impressive military fortress, the Castle of 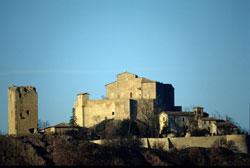 Rossena, situated next to the sighting tower of Rossanella. Situated on the top of a reddish volcanic hill, the complex is one of the most beautiful ones in the surrounding area. Erected in the X century, the castle still retains its original aspect and, after the extensive restoration works performed in 2000 on the occasion of the Jubilee, it was turned into an hostel, thus providing outstanding opportunities for those who want to spend their holidays visiting the Castles of Reggio Emilia and enjoy the unique atmosphere which permeates the whole of the surrounding area.

Recent excavations unearthed part of the original merlons and the side bastions of the Castle of Correggio, which dates back to the year 1000, as well as an ancient tower which was restored and transfomed into the bell tower of the Basilica of St. Quirino. However, the major monument in Correggio is Palazzo dei Principi (Palace of the Princes), the outstanding Renaissance residence of the Da Correggio family, the current seat of the Town Hall, the archives, the public library and the Civic Museum of Correggio, which cherishes precious paintings by Donnini, Asioli and Malatesta, XVI-century Flemish tapestries and inestimable works of art by Mantegna and Correggio.