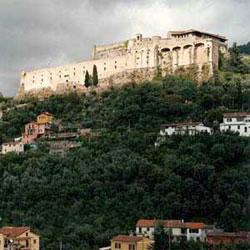 Together with the nearby Carrara, Massa is the northernmost province of Tuscany. Bordering Liguria and Emilia-Romagna, it is situated just in the heart of a narrow plain which develops between the Ligurian coast west and the steep slopes of the Apuan Alps east.

This narrow strip of land was the stage of fierce fighting among peoples from Pisa, Florence and Lucca, who alternatively wielded their power here up to the mid fifteenth century. The city began experiencing political and administrative stability starting from 1442, under the domination of the Malaspina family.

In the XV century, the Malaspina family chose the Castle, an ancient fortress situated on the top of the local hill, as its residence. A visit of the castle gives tourists the possibility to admire a well-preserved example of a Renaissance court.

Under the domination of the Malaspina family and the powerful Cybo family from Genoa, the city experienced utmost splendour and prosperity. The urban patterns which characterized the new Massa Cybea turned it into a modern and fine city. The fine marble from the nearby quarries, which has been considered the most precious treasure of this land since the Roman Age, was employed to build fountains, gates of aristocratic residences, new palaces and extensions of existing buildings. 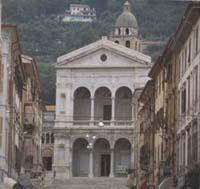 Renovation works started in 1557 and continued for over a century. The Ducal Palace is able to catch the visitors' attention for its harmonious appareance and the fine architectural extensions realized by the acclaimed architect Alessandro Bergamini in the early eighteenth century.

Bergamini also realized the Chapel, the inner open gallery known as “portico of one hundred columns”, the marble staircase, the upper loggia, the impressive red facade, the Grotesque-Baroque Neptune Cave situated in the inner courtyard and the wonderful alcove of Duke Carlo II, which is provided with outstanding marble decorations realized by the greatest sculptors from Massa and Carrara. In the seventeenth century, an ancient Franciscan monastery was enlarged and embellished and subsequently turned into the Duomo of the city.

The new Duomo, which is situated a short distance from Piazza Aranci, offers visitors an outstanding example of the architectural elegance which characterized the Cybea family. It hosts important sculptures, such as the high altar by Bergamini, the fascinating Cybeo-Malaspina cemetery and an underground chapel which cherishes the funerary urns of the Dukes of Massa. Other important masterpieces realized for the Duomo are currently hosted in the nearby Diocesan Museum of Sacred Art. 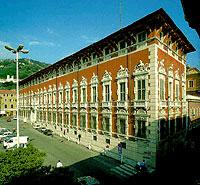 Apart from the Duomo, other important religious buildings in Massa are the Parish Church of St. Vitale in Mirteto, which hosts marble sculptures dating back to the XV century, and the small church of St. Leonardo al Frigido, which, notwithstanding the numerous restoration works it underwent, retained its simple Medieval structure and, up to the post-war period, the wonderful XII-century gate by Biduino, which is currently hosted in the Metropolitan Museum of New York.

Another interesting tourist itinerary is the tour of the Ducal Villas. Not to be missed is Villa Massoni, which is situated a short distance from the Fortress and was almost fully restored by Bergamini, and Villa Rinchiosa, which features an outstanding portico, impressive red and white facades and a large park which make it an appreciated residence.

Under Napoleon, the town layout experienced many variations, such as the demolition of the ancient Parish Church of St. Pietro and the building of Piazza Aranci, the major symbol of the city. The square was designed to provide a wider and more spectacular background to the Ducal Palace and was named after the two rows of orange trees planted in the three free sides of the square. In the second half of the nineteenth century, Piazza Aranci was enriched with an obelisk and the big marble sculptures featuring lions which were realized by Lodovico Isola.