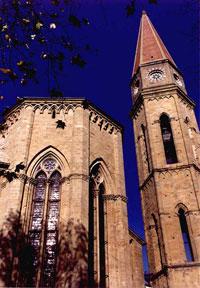 Situated where Valdarno, Valdichiana and Casentino merge, Arezzo has been a natural crossing of the Apennines since remote past.

An artistic city of ancient origins, it has alway been renowned for its handicraft, its prosperity based on a thriving jewellery industry. The numerous archaeological finds which were discovered here bear witness to the fact that the territory has been settled since the Palaeolithic, although proper evidences dating back to the ancient history of the town have been gathered since the IX century BC, when one of the most important Etruscan cities, Arretium, was founded on the top of San Donato's Hill, the current city centre.

The city boasts inestimable works of art dating back to the Etruscan Age; the Chimera, a bronze statue featuring parts of the body of a lion, a goat and a snake, is one of the most important Etruscan finds ever found in Italy. Discovered in the ‘500, it is one of the most representative symbols of the city and is currently cherished by Florence's Archaeological Museum.

During the battle of Rosselle, a small village situated a short distance from Grosseto (295 BC), the Etruscans were defeated by the Roman army and Arezzo became the symbol of the northern expansion of the Roman empire. During the Imperial Age, plenty of theatres, baths and a large amphitheatre were built in Arezzo. Under the Lombard domination Arezzo experienced a deep crisis, but flourished again when it became an episcopal seat and both cultural exchanges and the building of new facilities were fostered. Visiting Arezzo, it is still possible to become aware of the city's ups and downs by admiring both cultural and artistic sights.

Not to be missed is the Church of St. Domenico, whose construction started in 1275 and was completed in the following century. It hosts fourteenth-century decorations, as well as an important wooden crucifix painted by Cimabue, which is still regarded to be one of the most representative masterpieces of the thirteenth-century painting.

The Cathedral named after St. Donato, the Duomo, was started in 1278 but completed only in 1511. The interior cherishes works of art dating back to different historic periods: the altar dates back to the first half of the fourteenth century, and so do the marble altar-piece and the frescos of the Ubertini chapel. Not to be missed is the famous fresco of Mary Magdalene by Piero della Francesca (1460).

Another interesting sight is the cycle of seven stained-glass windows realized by Guillaume de Marcillat between 1516 and 1524. The wooden choir was designed in 1554 by Giorgio Vasari, one of the most important personalities in Arezzo who also contributed to the renovation of the eleventh-century Parish Church of St. Maria, as evidenced by its Romanesque facade which was fully renovated according to his project in 1560. 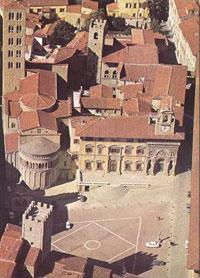 the central Piazza Grande. Visitors who are interested in deepening their knowledge of the sixteenth-century many-sided genius can visit the House of Vasari, the elegant residence frescoed by the artist himself which today hosts the Vasari Museum and Archives.

Spending some days in Arezzo, it is soon possible to understand how deeply the city is linked with the famous cultural personalities who were born here. Tourists will have the opportunity to visit the square and statue named after Guido Monaco, the so-called Guido d’Arezzo, the benedictine friar who was born here in the late X century and invented the four-line stave, or the large nineteenth-century theatre named after Francesco Petrarca, the most famous man of letters from Arezzo who was born here in 1304.

The so-called House of Petrarca is the seat of Petrarca Academy of Letters, Arts and Science.
In the fourteenth century the fortunes of Ghibelline Arezzo started to ebb and in 1384 the city yielded to Florentine domination, as evidenced by the impressive Medici Fortress. This new domination deeply affected both architectural and artistic patterns, as evidenced by the fresco cycle of the Legend of the True Cross by Piero della Francesca cherished by the Basilica of Saint Francis.

Tourists who flock to Arezzo on the first Sunday of the month can enjoy the numerous market stalls mounted in the old town on the occasion of Arezzo's antiques exhibition, one of the most famous and appreciated antiques fairs in Italy. Not to be missed are the music events the city hosts: at the end of August is an international competition of polyphonic choirs dedicated to Guido Monaco which attracts lovers of the genre from all over the world, while in Autumn is the international festival 'The great Music events' organized by the Italian Philharmonic Society.