The Castles of Lunigiana 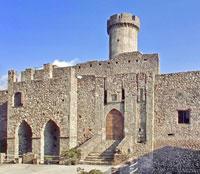 The Lunigiana Castles are situated on the prosperous area corresponding to the former colony of Luni, which was founded by the Romans in 177 BC just in the heart of the valley of the river Magra. Starting from the Carolingian Age, these territories were dominated by the Malaspina family, which marked its passage over the territory commissioning impressive fortresses and taking over outstanding aristocratic residences.

All over the centuries, popes, emperors, pilgrims, kings and conquerors took over the territories and castles belonging to the Malaspina family, which were situated along the ancient Via Francigena which crossed the whole Lunigiana valley.
Extending between the Provinces of La Spezia and Massa-Carrara, these territories boast outstanding natural sceneries surrounded by a lush vegetation and surmounted by the impressive peaks of the Apuan Alps.

To spend a holiday visiting the Lunigiana Castles gives guests the opportunity to admire an outstanding combination of art, culture and nature and to enjoy the fascination and profusion of these fairy-tale places.
Pontremoli is the first village along the Via Francigena and once marked the northern boundary of the Lunigiana. Its old town, which develops between the river Magra and the stream Verde, is easily accessible through narrow Medieval bridges.

Its strategic position made Pontremoli a target for numerous conquests from rival Italian Lords, such as the Malaspina, Visconti, Fieschi and Sforza families. The village is dominated by the millenary castle known as Castle of Piagnaro, from the “piagne” (stones) which were once used to cover the roofs of the houses. The military function it was given by the Lombard Adalberti family in the year 1000 was carried out up to the XIX century, even if the building subsequently underwent further restoration works.

The lower part of the Castle of Piagnaro has been opened to the general public and has hosted the Museum of the Stone Structures since 1975. After a walk across the old town of Pontremoli, visitors can head to Villafranca in Lunigiana, a small medieval village which was situated along the ancient via Francigena.

Villafranca hosts the ruins of the ancient fortress which stood in the old town, as well as two outstanding castles situated on the top of two adjoining hills. The 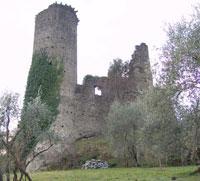 Castle of Malgrate is one of the most representative fortresses in Lunigiana, since it is provided with a 25-metre-high cylindrical tower overlooking the valley of the river Begnone.

In front of the Castle of Malgrate is the Castle of Virgoletta. Built in the XII century, it was first inhabited by the Bishops of Luni and subsequently taken over by the Malaspina family. In the XIII century it was added new walls and provided accommodation to Dante. All over the years, the residence was emebellished with fine furnishings, decorations and tapestries which which were all destroyed during World War II. From Villafranca it is possible to reach Tresana, the seat of the fully restored Castle of Villa Tresana.

Following the course of the river Bagnone, tourists will reach the Castle of Castiglione del Terziere, which was built in the mid fourteenth century by Franceschino Malaspina over the remains of an ancient Byzantine settlement. The castle has been owned by Loris Jacopo Bononi since 1969, who founded the Centre of Humanistic Studies Niccolò V featuring a collection of documents, ancient manuscripts and literay works by authors who were born in Lunigiana or became involved with it. Bagnone also hosts the Castle of Treschietto, which is situated on the top of a rock spur falling sheer to the valley, where a cruel marchese of the Malaspina family lived. Extensive excavations carried out in the surrounding area unearthed a feminine stone dating back to the Bronze Age which is known as the Stone Venus of Treschietto.

The nearby Mulazzo comprises 16 small villages and an ancient Benedictine abbey which are situated amidst sweet hills and lush valleys which extend to the left of the river Magra. When the Malaspina family settled in the village of Mulazzo in the XIII century, the whole area was fortified. Today Mulazzo is the seat of the Malaspina Research Centre, while the Castle of Lusuolo will be turned into the 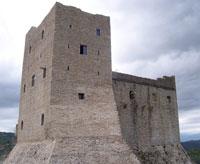 Museum of the Emigration of Peoples from Tuscany.

The visit to the Lunigiana Castles continues across the Province of Massa-Carrara up to the boundary with Emilia, where the small village of Comano is situated and sheltered by the Apennines. The Castle of Comano is still provided with its ancient circular fortress, as well as with towered walls dating back to the early XV century. The remaining part of the palace was completely destroyed, but its ruins seem to date back to a more recent age.

Driving along the road which leads to the Cerreto Pass it is possible to reach Fivizzano. The ancient seat of the Medici family, its beautiful city centre situated in a panoramic position overlooking the underlying valley of the river Rosaro played a fundamental role as an important cultural centre. Jacopo da Fivizzano, the owner of one of the first print shops in Europe, lived here in 1471. The Castle of Verrucola, a charming example of Medieval architecture which was knowingly restored by its current owner, the sculptor Pietro Cascella, and the Castle of Aquila, are among the most representative medieval buildings in Lunigiana.

West is Licciana Nardi, a XIII-century village whose territories were long disputed among the Malaspina family, the Luni bishops and the Grand Duchy of Tuscany, Lucca and Genoa. The fortress and castle which dominate the main square were both turned into the aristocratic residence of the Malaspina family between the XV and the XVI century.

The historic name of the city, Licciana, was then added Nardi to celebrate the patriots Anacarsi and Biagio Nardi, who were born in the nearby hamlet of Apella. The defensive castles which were built around the ancient village are the Castle of Bastia, a square fortification which was erected in the XV century by the Malaspina family on a strategic position overlooking the centre of Licciana Nardi and has recently been turned into a private residence, and the Castle of Monti, which is situated on the right bank of the river Taverone and can be admired from the outside or visited by invitation. The XIII-century castle features an irregular rectangular shape, with cylindrical towers situated on the corners of the structure.

The defensive walls, which were erected by the Malaspina family in the XV century, separate it from the surrounding landscape, that is to say a large green meadow enclosed by ancient holm-oaks. 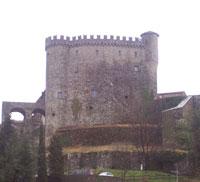 The last stage of the visit to the Lunigiana Castles in the province of Massa-Carrara is the municipality of Fosdinovo. The village was acquired by the powerful marchese Spinetta Malaspina il Grande, who turned it into the heart of all its dominations in 1340.

The Castle of Fosdinovo, which was built in 1124, was subsequently enlarged in the XIV century by Marchese Spinetta Malaspina, who maintained the severe fortification of the outside facade, but fully restored the interiors, thus realizing one of the most elegant and precious aristocratic residences of that age. The castle, which can be visited by appointment, is said to be haunted and to be rich in traps designed to eliminate unexpected visitors.