Siena and the Palio 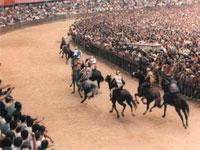 The Sienese Palio is regarded to be the most celebrated historic recollection in Italy, as well as one of the most appreciated events which are able to attract both local inhabitants and foreign tourists. The name of the horse race which takes place in the old town of Siena and involves every year ten out of seventeen contrade (districts) derives from the name of the prize, the so-called Palio, coming from the Latin word pallium (wool mantle) which identifies a cloth of rich fabric which was originally given to the church of the winning district.

The first race (Palio di Provenzano) is held on July 2, while the second one (Palio dell’Assunta) is held on August 16. After exceptional events and on important anniversaries, the Sienese community may decide to hold a third Palio. Those who flock to Siena on the occasion of the Palio will have the opportunity to take part in an original event and to enjoy the absorbing atmosphere which permeates the city in the days preceding and following the Palio.

The origin of the Palio is still a controversial matter. Horse races involving aristocratic families have been very popular in Italy since the XII century, but in the XV century Siena began to host competitions featuring new rules and paths which involved humble families too. The so-called Palio alla lunga, which was run across the whole of the city, was replaced by Palio alla tonda, during which horses went around Piazza del Campo.

The Palio di Provenzano, which is held every year on July 2 to celebrate Madonna di Provenzano, has become a regular appointment since 1555, when Siena was taken over by Spain. On July 2, 1555 the miracle of St. Caterina took place, whose statue was damaged by the shot of a Spanish soldier who died of his own shooting.

In 1611 the Basilica of Provenzano was erected to cherish the statue of Madonna di Provenzano, which was chipped by the bullet. This is the place where the winning contrada still bears the Palio shoulder-high.

Those who already know Siena can flock here on the occasion of the Palio to enjoy the thrilling atmosphere which permeates the whole city during those days. Preparations, which occur according to the same strict rituals every year, last four days, and are followed by plenty of funny events and dinners which take place in the winning contrada and the whole district including it.

The organization of the Sienese Palio, which is financed by the local Municipality, is left to private citizens who willingly take place. During the days which precede the race, tourists flocking to Siena can attend interesting trial sessions, while on the day of the competition the whole of city flocks to Piazza del Campo to enjoy the magic atmosphere and thrilling emotions the Palio conveys. 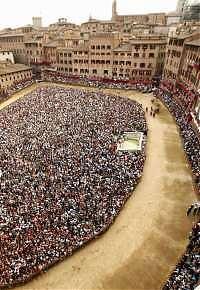 The ritual of the day of the race starts with the traditional Messa del fantino (Mass of the jockey): every contrada has a church where both horse and jockey are blessed. On this occasion, it is also possible to visit the seat of the Contrada, which is situated next to the church and cherishes important documents, memorabilia, cloths and historic flags.

In the afternoon, the famous Passeggiata Storica takes place, a spectacular pageant where 600 participants representing the 17 Contrade and the ancient institutions of the Republic of Siena cross the city from Piazza del Duomo up to Piazza del Campo. At 7.30 p.m. (July) / 7 p.m. (August) the jockeys ride the horses from the courtyard of Palazzo Comunale and approach the so-called Mossa, the starting line where the race begins from.

Apart from special rituals which have been preserved all over the centuries for luck and tradition and a series of odd rules which regulate the Sienese Palio only and are only understood by local inhabitants, there is also a special dictionary of peculiar words dedicated to the Palio which is used to describe the different passages of the race.

The winner is the first horse to cross the finish line with its head ornaments intact and is awarded a Palio on Palco dei Capitani, applauded by a crowd of joyful local inhabitants. From then on, the city is livened up by parades and dinners held to celebrate the winners. The official banquet which takes place in the squares of the winning district, the so-called Dinner of the Victory, is centred around the horse, which eats and is celebrated by every participant.