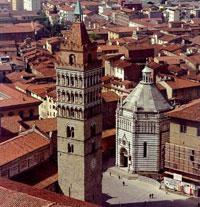 Pistoia is a privileged holiday destination for the lovers of artistic cities flocking to Tuscany. The fundamental role the city played, which is evidenced by the impressive monuments and buildings the old town cherishes, was due to its strategic position as an important trade centre and to the thriving period it experienced as a free city-republic, when it achieved utmost artistic and cultural splendour.

In the following centuries, Pistoia was the seat of fierce fighting between the nearby cities of Lucca and Florence, which eventually took over it in 1401. The aristocratic families from Pistoia and the influence Florence wielded over the city gave Pistoia new buildings, churches and prestigious palaces which were realized according to Renaissance architectural patterns.
The tour of the city could start from the central Piazza del Duomo, where the main religious and civil buildings of the city are situated.

The place where the main streets merged, it has been the centre of the city since the Roman Age. During the Middle Ages, it was the seat of the market and between the XI and the XIII century most of the buildings standing here were erected and currently give the square the harmonious proportions which made it famous.

The Duomo, which is dedicated to Saint Zeno, is situated over the ruins of an early Christian parish church. 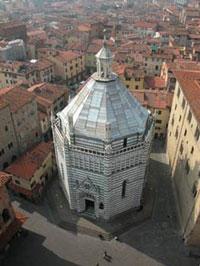 With the exception of the marble portico provided with three series of balconies, the project dates back to the XII-XIII century, and so does the one of the impressive Bell Tower which was erected next to the Cathedral. Among the numerous artistic masterpieces cherished by the Duomo are many paintings and sculptures, such as the precious painting by Lorenzo di Credi, which probably drew inspiration from a sketch by Andrea del Verrocchio, which is cherished in the Chapel of Saint Donato.

The most important work of art the Duomo hosts is the altar of Saint James, a wonderful example of the silversmith's craft realized by the schools of Siena, Pistoia and Florence between 1287 and the mid fifteenth century. The precious silver dossal is made up of a big altar piece and a frontal decorated with reliefs depicting stories of the Old and New Testaments and the stories of Saint James. The whole altar is decorated with a series of statues portraying Saint James, among which the one of Saint James in throne.

Piazza del Duomo is dominated by the fourteenth-century Baptistry of St. Giovanni in Corte by Andrea Pisano, which features a traditional octogonal Gothic structure and is covered with white and green marbles, and by the ancient Bishops' Palace, which makes the ideal base for discovering the archaeological finds of the Roman Pistoriae and is the current seat of the Capitulary Museum, which cherishes precious statues, paintings and other items linked to the Duomo.

Starting from the XIII century, religious architectures began to be complemented by other buildings, such as Palazzo Pretorio, or del Podestà, and Palazzo del Comune, which is the seat of the rich collection of works of art of the Civic Museum and of the Research Centre Giovanni Michelucci.

Every year on July 25, on the occasion of the celebrations of the patron saint Saint James, Piazza del Duomo hosts a traditional tournament, the so-called Giostra dell’Orso (Bear Joust), when the best horsemen of the districts of the town tilt with lances at a target held up by a dummy shaped like a bear. This is the ideal occasion to taste the typical maccheroni all’anatra (pasta with duck sauce), the traditional dish of the festival.

Apart from the Duomo, the lovers of Medieval art who visit Pistoia can admire other important churches cherishing inestimable works of art. Not to be missed is the Church of St. Andrea, an ancient building dating back to the VIII century which cherishes the internationally renowned pulpit of St. Andrea sculptured by Giovanni Pisano, and the Church of St. Giovanni Fuorcivitas, a Romanesque complex which is currently situated in the centre of the city but whose name is due to its original collocation outside the city walls at the time it was built, in the XII century. 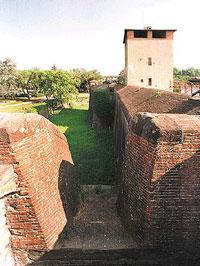 Among the most important works of art the church cherishes are the rich portal provided with an architrave depicting the Last Supper, which was sculptured in 1166 by Gruamonte, and the beautiful stone and brick cloister which dates back to the same period. The interior is rich in inestimable works of art, ranging from the Visitation in glazed earthenware realized by Luca della Robbia in the mid fifteenth century to the outstanding marble holy-water stoup situated in the centre of the nave and supported by pictures portraying the Virtues attributed to Giovanni Pisano.

Among the most ancient buildings, not to be missed is Ospedale del Ceppo, the XIII-century hospital which was turned into Pistoia's Medicine School in 1666 and is currently the seat of the Museum of the surgical instruments. The Renaissance portico hosts a frieze in polychrome glazed earthenware realized by Della Robbia.

Walking down the streets of Pistoia it is possible to reach two large public gardens, situated west and south-east respectively on the slopes of the impressive Medici Fortress of St. Barbara, which during summer turns into an outdoor cinema.

During summer, Pistoia arranges an important event for music lovers, Pistoia Blues, the music festival which takes place in the second week of July and attracts famous international artists and large numbers of visitors belonging to every age group.