Declared World Heritage Site by UNESCO in 1982, the old town of Florence is one of the most famous and appreciated sights in the world, and the inestimable monuments, buildings and works of art it cherishes attract millions of tourists every year.

The Cradle of the Renaissance, the Age when the city achieved utmost splendour, Florence is inextricably linked with that period, which deeply affected its fine and rational aspect characterized by elegant and symmetric proportions. In the Middle Ages, this free city-republic stood out for its political power, economic prosperity, cultural richness and artistic fervour, thus experiencing utmost splendour for over 500 years, from the XI up to the XVI century.

Although featuring normal sizes, the old town of Florence cannot be visited in one day only without missing some important sights. Tourists who want to visit the city district by district can start their tour from north-west, the district of St. Maria Novella. Here is one of the most famous churches in Florence, the beautiful St. Maria Novella, an outstanding example of Gothic-Florentine architecture which was built in 1246 and cherishes inestimable masterpieces, such as the Madonna and the Child by Nino Pisano, important paintings by Filippino Lippi, the famous cycle of frescos by Ghirlandaio, the wooden crucifix by Brunelleschi, the enormous painted crucifix by Giotto and some superb frescos by Masaccio.

Situated a short distance from the Central Station, St. Maria Novella is the ideal departure point to visit the city.

East is St. John district, which is named after the baptistry situated in front of the Duomo. The baptistry, which is situated in Piazza del Duomo, is one of the most ancient and important buildings in Florence, even if it is difficult to date.

Some think that the original building dates back to the 4th-5th century, others state the building was erected in the 11th-12th century in the Romanesque style. The plan is octogonal and enclosed by a double series of columns. Covered with white and green marble, St. John Baptistry features windows imitating the classical style and three openings closed by bronze doors of great value by Andrea Pisano and Lorenzo Ghiberti, which were realized between 1330 and 1450.

The same square hosts the beautiful Giotto's Bell Tower, which was designed in 1330 by Giotto and Andrea Pisano and completed by F. Talenti. The 85-metre-high bell tower offers outstanding views over the underlying city.

St. Maria del Fiore, the Duomo, is the most important religious building in the city and an outstanding example of Gothic-Florentine architecture featuring broad and simple lines. The church was designed by Arnolfo di Cambio and the first stone was laid in 1296. After Arnolfo died, works on the cathedral slowed for the following thirty years. In 1420-30 Brunelleschi crowned the church with a beautiful red dome, the current symbol of Florence. The current facade was designed by De Fabris in 1871 - 87 after the previous had been destroyed in 1330; he drew inspiration from the side patterns of the cathedral.

Not to be missed is the interior of the Duomo, which cherishes the funerary monument to Sir John Hawkwood which was painted by Paolo Uccello in 1436.
St. John district also hosts Piazza San Lorenzo, which is situated north of the Duomo and is dominated by the Basilica of St. Lorenzo and Palazzo Medici Riccardi.

St. Lorenzo, one of the finest buildings of the early Renaissance, was started by Brunelleschi in 1442 and completed by Manetti in 1460. Its facade, however, remained unbuilt. The interior cherishes many works of art by Michelangelo and Donatello, while the Old Sacristy was designed by Brunelleschi and decorated by Donatello. It features Renaissance architectural patterns of great value. 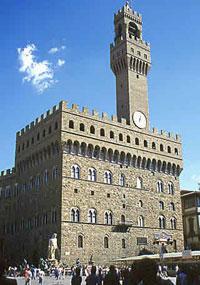 Next to St. Lorenzo is the Laurentian Library, which was realized by Michelangelo and founded by Cosimo the Elder. The Medici Chapels, situated at the rear, cherish an inestimable work of art by Michelangelo, the New Sacristy, the sepulchral chapel of the Medici family he sculptured.
South is the District of St. Croce, which is named after the homonymous church situated along the banks of the river Arno in the southern part of the old town.

One of the most appreciated Franciscan churches in Italy, the Church of St. Croce is an outstanding example of Gothic-Florentine architecture, as well as the burial place of some of the most illustrious historic and artistic Italian personalities. Designed by Arnolfo di Cambio, its structure dates back to 1294, while the marble facade was built in a modern style in 1860.

Its simple and solemn interior cherishes the tombs of Michelangelo, Galileo, Macchiavelli, Alfieri, Foscolo, Rossini and many others. The relief of the Annunciation situated on the south wall over one of the altars was realized by Donatello, while the frescos of the Bardi Chapel were carried out by Giotto and later restored to eliminate the paintings depicting the Stories of St. Francis which were realized over the original fresco.

Next to St. Croce is the entrance to the Pazzi Chapel, which is situated at the end of a fascinating fourteenth-century cloister. Designed by Brunelleschi in 1440, it is one of the most representative masterpieces of the early Renaissance architecture. Its porch leads to the Museum of the Building of St. Croce, which cherishes interesting paintings by Cimabue and Donatello.

It was designed by Arnolfo di Cambio between 1299 and 1314. Both its embattled balcony and Gothic double lancet windows date back to the Middle Ages. Even the 94-metre-high Arnolfo Tower is surrounded by a double series of merlons. The interiors of Palazzo Vecchio cherish masterpieces by numerous artists, such as sculptures by Michelangelo and frescos by Ghirlandaio and Vernocchio.

Next to the Square and Palazzo della Signoria is the monumental complex of the Palace of the Uffizi, the ancient administrative centre of the Dukedom of the Medici family. The outstanding building by Vasari, which was erected between 1560 and 1580, currently hosts the Uffizi Gallery, the most important museum in Italy and one of the most appreciated art galleries in the world. The inestimable collection of masterpieces of Italian painting it cherishes is accompanied by works of art by important foreign schools.

Overlooking the river Arno, the Uffizi Gallery is situated next to Ponte Vecchio,

another famous symbol of the Medieval Florence. The oldest bridge in Florence, it dates back to 1345. It consists of three segmental arches and is wholly occupied by jeweller's shops. It connects the city with the other bank of the river, which is known as Oltrarno.

Crossing via Guicciardini it is possible to reach the impressive Pitti Palace, the most stately one in Florence, which was erected in 1458 and is attributed to Brunelleschi. The building is reinforced by three series of arch-headed openings and is famous all over the world for the rich collections it cherishes inside the Pitti or Palatine Chapel, among which are artworks by Canova, Titian, Rubens, Perugino, Ghirlandaio and many others. At the rear of the Palace, provided with an access to the left of it, is the beautiful Bòboli Garden, the most famous Italian garden, which was realized by Tripolo in 1550.

Not to be missed is St. Spirito district, situated south west, which is dominated by the homonymous Renaissance church. Started by Brunelleschi in 1444 and completed by Manetti 44 years later, the Basilica of St. Spirito catches the visitors' attention for its elegance and harmonious proportions.