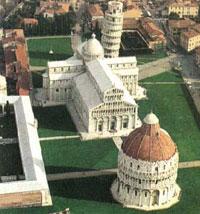 The most famous provincial capital of Tuscany after Florence, Pisa is situated on the right bend of the mouth of the river Arno and is dominated by Mounts Pisani, which surround the whole plain of Lower Valdarno.

Pisa experienced glorious vicissitudes and historic events which left indelible marks over the city layout, which still retains evidences dating back to different ages. A thriving Roman harbour, Pisa achieved utmost splendour in the Middle Ages, from the 11th up to the 13th century, when it acquired traditional fame as a Seafaring Republic and took over Sicily, Corsica and Sardinia.

Following fierce fighting against Lucca, Florence and Genoa, the city declined and was taken over by Florence in 1405. It subsequently experienced another golden age under the domination of the Grand Duchy of Tuscany and became a thriving scientific centre where also Galileo Galilei, who was born here, operated.

The buildings which made Pisa famous all over the world date back to the first golden age the city experienced between the 11th century and the early 15th century. Pisa cherishes plenty of architectural and sculptural masterpieces, among which the famous buildings situated in the so-called Campo dei Miracoli (Field of Miracles), which was declared UNESCO World Heritage Site.

The tour could start from the impressive buildings of the Duomo, Campo Santo, Baptistry and the famous Leaning Tower, which are all situated in Piazza del Duomo, also known as Campo dei Miracoli (Field of Miracles). The Duomo, whcih was built from 1064 up to the 12th century, is the most representative example of the Pisan  Romanesque style, and is characterized by the harmonious combination of Classical, Lombard and Muslim architectural patterns which then spread across Tuscany, Corsica, Sardinia and other southern countries. 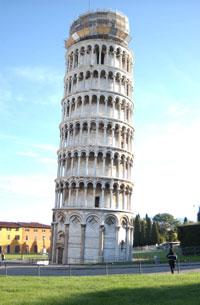 Construction was started by Buscheto and completed by Rainaldo, who also extended the original project. The Duomo is characterized by decorated sides embellished by elegant arches and a monumental facade. The interior is divided into five naves; beneath the Dome is the famous pulpit by Giovanni Pisano, the most representative masterpiece by one of the major Gothic sculptors in Italy.

The bell tower of the Duomo is better known as Leaning Tower. The construction of the first floor began in 1173, a period of great prosperity. The tower began to sink after construction progressed to the third floor one hundred years later due to foundations set in weak, unstable soil. Featuring a cylindrical shape, the base of the Tower is surrounded by blind arches and the upper floors are encircled by six series of small loggias which culminate in a belfry. A staircase made up of 294 stairs spirals up to the top of the tower, which offers outstanding views over the whole city.

The Baptistry, which is situated just in front of the entrance of the Duomo, catches the visitors' attention for its impressive Romanesque architectural patterns. The round building was built between 1152 and the end of the fourteenth century by several artists, among which Nicola Pisano. The portal facing the facade of the Duomo is flanked by classical columns which are decorated with sumptuous reliefs realized by acclaimed artists belonging to the Pisan school. The Baptistry cherishes the famous pulpit by Nicola Pisano, the first masterpiece of the Italian Gothic sculpture. The largest baptistry in Italy featuring a circumference of 107 metres, it is dedicated to St. John the Baptist. The immensity of the interior is overwhelming, but it is surprisingly plain and lacks decoration.

The Campo Santo is one of the most representative examples of the traditional Gothic style from Tuscany. Built in 1277 by Giovanni di Simone, the Camposanto features a rectangular plan and is said to have been built around a shipload of sacred soil brought back to Pisa from the Fourth Crusade.
The outer wall is composed by a portico with pillars and blind arches which were then turned into four-lancet windows. It cherishes numerous frescos and sculptures, including some works of art by Giovanni Pisano.

Not to be missed are the beautiful Piazza dei Cavalieri, which is dominated by the Church of Cavalieri 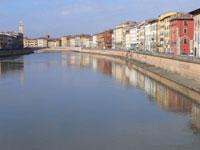 di Santo by Vasari, and Palazzo della Carovana by Vasari too, the current seat of Scuola Normale Superiore, which was founded by Napoleon in 1810 according to the model of the École Normale Supérieure in Paris, and of an important research and training centre.

Not to be missed are the fascinating itineraries which run along the river Arno. Among the most famous one is Lungarno Mediceo, where it is possible to admire the Romanesque church of St. Matteo, Palazzo Medici and the National Museum of St. Matteo.