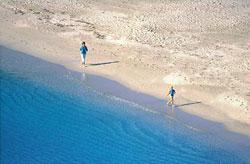 Situated 10 kilometres far from the Tuscan coast in the province of Livorno, Elba Island, the third largest island in Italy, is situated in front of Punta Ala and surrounded by the crystal-clear waters of the Tyrrhenian Sea.

Its strategic position, fertile landscape and mineral wealth made it the stage of numerous conquests and conflicts.

Settled since the prehistory, Elba island was taken over by the Etruscans for its iron resources, the Romans for its granite quarries and beneficial mud baths, conquerors from Pisa, Genoa and Lucca in the Middle-Ages and Spanish, French, English and Neapolitans in the following ages.

Eight towns liven up some areas of the island, while leaving large portions of the territory quite unspoiled. The beauty of the island soon catches the attention of visitors flocking here, who will appreciate the irregular and rough shapes of the indented coastline, the warm colours of the vegetation and the intense blue of both water and sky. The small coves which alternate with high cliffs falling sheer to the sea cherish unspoiled, intimate beaches of white sand.

Far from crowded beaches and surrounded by impressive rock spurs, sea lovers can spend unforgettable relaxing moments or explore the shoal, thus discovering the beauties of an underwater world where flora and fauna coexist in perfect harmony. Such an harmony also characterizes the whole landscape of the island, where few towns perfectly integrate with the natural environment without affecting its original aspect . 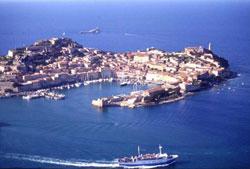 Porto Ferraio, which is situated north-east, is the most ancient town and has been exploited since the Etruscan Age for its large natural harbour. Nowadays, it is an appreciated seaside resort and an interesting historic centre too, since it hosts the house where Napoleon lived and two fortresses which dominate the city from on high, the sixteenth-century Forte della Stella and Forte del Falcone.

Apart from Portoferrario, the main seaside resorts of the island are Procchio north-west, Marciana Marina further west, Marina di Campo along the south-western coast and Porto Azzurro, which is idyllically situated just in the heart of a natural cove which nestles along the eastern coast of the island. Renowned seaside resorts, these small towns boast wide beaches equipped with high-quality services and facilities, such as beach umbrellas and mattresses and canoes and small boats for hire to make pleasant boat excursions.

Those longing for peace and tranquillity can explore the island looking for intimate coves to be reached through rough paths leading to the sea.
Very appreciated by the lovers of underwater fishing and diving, Elba Island hosts numerous diving centres where it is possible to rent equipments, gain information and 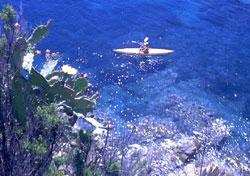 discover the most beautiful shoal. Beginners will also have the opportunity to experience their first divings under the supervision of skilled trainers.

Apart from these renowned seaside resorts, the island also cherishes small villages overlooking the Tyrrhenian Coast and a fascinating hinterland which abounds in precious evidences dating back to ancient ages. The archaeological sites of Le Grotte, Calata Buccari and Cavo give visitors the opportunity to admire the remains of Roman villas which were built between the I century BC and the III century AD.

The numerous Gothic XI-century Parish Churches which follow one another in the island bear witness to the long Pisan domination it experienced. Not to be missed are impressive Renaissance fortresses and Medieval castles, as well as the beautiful “San Martino” and “dei Mulini” Villas, the residences where Napoleon lived during his exile in Elba Island, which have recently been turned into National Museums.
Elba Island is rich in environmental and historic-artistic beauties and is characterized by an outstanding combination of man-made works and natural landscapes which is able to suit even tourists' most demanding requirements.