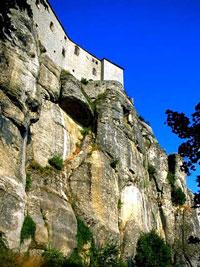 The municipality of Chiusi della Verna, in the province of Arezzo, is a small centre situated 1283 metres above sea level on the top of a rock spur, just in the heart of the Tuscan Apennines of Casentino. The surrounding mountains are fully covered with lush forests of beeches and firs.

The religious, cultural and tourist centre of Chiusi della Verna is the Sanctuary where Saint Francis spent a lot of spiritual retreats, a famous pilgrimage mecca for the friars who joined his order, as well as for thousands of pilgrims and believers.

Count Orlando Catani of Chiusi in Casentino gave it to Francis of Assisi in 1213, as a retreat specially favourable for contemplation.

Francis enjoyed the sanctuary very much and chose it as a place to spend long retreats year after year. In 1224, when Francis was about to die after his Rule had been approved by Pope Honorius IV, he withdrew for the last time to Chiusi della Verna and received the stigmata on both feet and hands while praying, while his body covered with marks corresponding to the crucifixion wounds of Jesus. 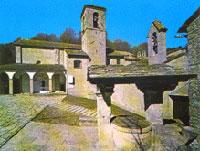 Francis was built to celebrate his personality. The different buildings which dominate Piazza del Quadrante cherish artistic, cultural, historic and liturgical finds of great value which are able to attract not only pilgrims and believers, but also tourists and curious people who flock here year after year. The original core of the city develops around the small church of St. Maria degli Angeli, which was built between 1216 and 1218.

It hosts two altar-pieces and a dossal of glazed earthenware realized by Andrea della Robbia in 1485. Crossing Piazza del Quadrante, it is possible to reach the Basilica Maggiore, whcih was erected between the XIV and the XVI century.

The great artist also realized the monumental altar-piece depicting Saint Francis and other saints gathering around crucifixed Christ (1481). Piazza del Quadrante also leads to the monastery and guestrooms, where the friars of La Verna provide tourists who want to spend a night in the sanctuary comfortable accommodation. Both fascinating mountain landscapes and rough footpaths are outstanding attractions for people who want to spend some relaxing days in Chiusi della Verna.

Another important pilgrimage mecca situated in the province of Arezzo, a short distance from Chiusi della Verna, is the municipality of Camaldoli. The original core of the Monastery of Camaldoli dates back to 1000 years ago, when St. Romuald was given this territory of the Casentino forests by Count Maldolo.

The city centre developed in the low part of the town, around the Monastery which constantly underwent restoration works. In the fifteenth century the building was the seat of the Humanistic Academy, which gathered important personalities, such as Lorenzo the Magnificent and Leon Battista Alberti.

The presence of many important works of art attracts thousands of researchers and curious people every year. In the refectory of the Monastery are a painting by Pomarancio and some frescos by Lorenzo Lippi, while the church cherishes five works by Vasari. The library of the Monastery cherishes 30.000 volumes including the first printed book, rare codes and

A rough path surrounded by beeches and firs leads to the Retreat of Camaldoli, once formed by five cells and now made up of twenty rooms. Three ancient cells can still be visited, the most famous one being that of Saint Romuald.

The traditional specialities cooked according to ancient recipes and served in the numerous refreshment booths of the small centre give people a further opportunity to discover such a fascinating world. Camaldoli and Chiusi della Verna offer visitors the opportunity to experience deep emotions far from the hectic city life, exploring special itineraries which are able to take them back while enjoying spirituality and unspoiled natural landscapes.