Prato, a thriving Tuscan city whose economy has been based on the textile industry for a long time, is situated on the slopes of Mount Retaia, just in the heart of Bisenzio Valley. The city boasts plenty of important monuments, churches and buildings dating back to the period when it was a free city-republic ( from 1107 to 1351).

During this thriving period, the city experienced a significant population increase, which was caused by the outstanding development of the wool industry, the extensive land reclamation and the building of new waterworks which occurred here in the XI century.

Prato has always gathered large numbers of pilgrims flocking here to admire the Sacra Cintola or Sacro Cingolo, the belt of the Holy Virgin which has been cherished by the Duomo since the XII century and is still celebrated during the most important religious ceremony taking place in the city.
Those who visit Prato on September 8, during the celebrations held on the occasion of the birth of the Virgin, can enjoy an absorbing event which starts with a parade in period costume, the so-called Corteggio Storico, which leads to Piazza del Duomo, where the ostension of the Sacro Cingolo takes place.

The celebration is livened up by flag-wavers, archery competitions, a medieval street market featuring ancient crafts and traditions, music and fireworks. 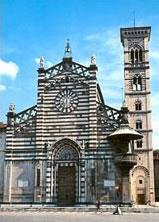 In the XII century, when Prato became a free city-republic, the ancient Parish Church of St. Stefano underwent extensive restoration works and the former plain V-century building was turned into one of the most impressive Romanesque-Gothic religious buildings in Tuscany. The exterior of the Cathedral features architectural patterns which became typical of all buildings in Prato and Florence, that is to say a combination of white and green marbles.

The interior cherishes precious sculptures and cycles of frescos. In the Main Chapel Filippo Lippi painted the Histories of St. Stephen and St. John the Baptist; the Cintola Chapel has frescos of Histories of the Virgin and the Sacra Cintola by Agnolo Gaddi; in the Assumption Chapel Paolo Uccello painted the Histories of the Virgin and St. Stephen. Piazza del Duomo, which develops around the Basilica, hosts the interesting collection of sacred art of the Museum of the Building of the Duomo.

The other impressive medieval building in the city, the Emperor's Castle, dates back to the following century and was the ancient imperial residence which was commissioned by Emperor Frederick II of Swabia. It stands in Piazza delle Carceri, just in the heart of the city centre.

Prato's art and architecture were deeply affected by the Florentine style, which was imported here in 1351, after the city was sold to Florence. Such a political and cultural subordination became even more rooted in the following centuries and lasted up to 1992, when Prato eventually became an autonomous province.

The Renaissance Basilica of St. Maria delle Carceri is an outstanding example of the above mentioned trend. Built on the site of a miraculous event, a short distance from the Emperor's Castle, the Church of St. Maria delle Carceri, the most notable example of the use of a Greek cross plan, was erected by masters and architects selected by the Lord of Florence, Lorenzo de Medici, and was designed by Giuliano da Sangallo according to the architectural patterns of the Pazzi Chapel by Brunelleschi in Florence.

and green external covering and the stone used to realize the interior underline the solemn-looking classicism of the architecture. The inner walls are enriched by outstanding masterpieces, such as frescos by Andrea Della Robbia, Buontalenti and Pietro Miniati, and the stained-glass windows designed by Domenico Ghirlandaio.

Prato's town layout was deeply affected by the significant development of the textile industry the city experienced, so much that in the early ‘900 the city centre was nicknamed “the city of one hundred chimneys”.

Many historic factories provided with brick chimneys were pulled down during the second post-war period, while others still characterize the city layout and are regarded to be outstanding finds of industrial archaeology; among the most appreciated ones is the so-called Cimatoria Campolmi.

Not to be missed is the most important museum of contemporary art in Tuscany, the Centre of Contemporary Art Luigi Pecci, which cherishes important collections of works of art by internationally renowned Italian and European artists.
Those flocking here in summer will have the possibility to attend the events of the so-called PratoEstate, a review of concerts, theatrical performances and outdoor shows which takes place in the main squares of the old town and the inner courtyard of the Emperor's Castle from June to September.