Ciociaria is the name of a historical region which extends from Rome up to the river Liri. It is named after the primitive leather footwear of shepherds from southern Latium (the so-called “ciocie”).

The historical territory of Ciociaria corresponds to the geographical area which was once ruled by Ausonic, Voscian and Samnite populations. Today, the

region corresponds to the province of Frosinone, although its northern and southern ends have been included in the provinces of Rome and Latina respectively.

Legend has it that the territoy of Ciociaria corresponds to the lands which were once dominated by Saturn, who convinced local populations to abandon their nomadic life of hunters and learned them how to cultivate crops, breed cattle and build permanent settlements. The mythical cities ruled by Saturn were Alatri, Anagni, Arpino, Atina and Ferentino, whose impressive city walls are still able to catch the visitors' attention because of the huge limestone rocks they are made of.

The Aeneid tells that Aeneas crossed these lands when fleeing from Troy together with his father Anchises and his son Ascanius, the latter being the founder of Rome according to Virgil. It took two centuries before the Roman Empire conquered the whole Latium and the cities overlooking the 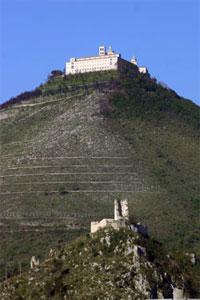 Tyrrhenian Sea: Ciociaria's populations stood out because they were able to retain genuine traditions and local usages and customs.

Ciociaria has a full calendar of food fairs, entertainment events and music festivals, as well as a variety of traditional feasts. Religious, country and rural traditions are still strong and alive. The celebrations of the patron saints with the processions, the illuminations and fireworks, the fairs and popular games, the palios and tournaments among the town's quarters witness the desire of the Ciociarian people to preserve the authenticity of  their peasant culture with their typical customes, music, rites and gastronomy. During popular events people wear traditional costumes with the typical footwear, the “ciocie”. Part of the Ciociarian folklore are songs, both sacred and profane, and dances, such as the saltarello, accompanied by the music of traditional bagpipes.

Christianity and the power of the church left an indelible mark on the history of Ciociaria. At the end of the IV century, the towns the Romans conquered in southern Latium were turned into powerful bishop's sees. Besieged by barbaric populations, they were able to withstand by building impressive castles, towers, houses and fortified monasteries. In 1058, the monastery of Montecassino recruited its own army and turned into the richest monastery of the Middle Ages (it was dubbed “the library of the world”).

Starting from the XI century, the territories of Ciociaria were the centre of fierce fighting among popes and emperors and the seat of the most famous Councils of the age. The richest families were ruled by important religious and political personalities of southern Italy. Note Boniface VIII, the most illustrious representative of the rich Caetani family. Incredible vicissitudes contributed to make Ciociaria a rich territory gathering precious artworks, outstanding sacred architectures and vestments realized by great artists which were brought to Avignone together with the papal court.

Most of the architectural heritage of Ciociaria, included the famous abbey of Montecassino, was destroyed during World War II. When the allied forces bombed the city of Cassino, they put an end to the golden age of Ciociaria and destroyed an inestimable heritage.

Those interested in spending their holidays in Ciociaria will enjoy ancient traditions, tasty specialities and local dialects which will help them understand the basic differences with the nearby cities of Rome and Naples. Ciociaria is characterized by the warm hospitality of local inhabitants and their superstitions and traditional rituals, such as wedding and funerary rites.

Gourmets will have the possibility to eat at traditional inns serving "poor" flavoursome dishes, such as abbacchio (roasted milk-fed lamb), lamb meat, polenta and pecorino cheese.