From north to south, from east to west, Rome, the so-called Eternal City, is able to catch the visitors' attention offering them the possibility to admire outstanding monuments, buildings and architectural beauties.

The magnificence of Rome's Empire, which made it the centre of important historical, political and commercial vicissitudes, is still redolent in the so-called Urbe, the citadel of ancient Rome.

The legacy of this uninterrupted history can be seen all over the city and the surrounding area, which are both scattered with inestimable artistic, historical and cultural evidences.

Below the Capitol lies the Roman Forum, which was once the focus of political, social, legal and commercial life, and the Imperial Fora, which were built when Rome's population grew. To appreciate the layout of the Roman Forum before wandering through its confusing patchwork of ruined temples, triumphal arches and basilicas, it is best to view the whole area from the Capitoline Hill above.

Via dei Fori Imperiali, whcih was built in 1932, separates the Roman Forum from the Imperial Fora and leads north west to Piazza Venezia, which is dominated by the imposing Victor Emmanuel Monument and the medieval Palazzo Venezia. A short distance from Palazzo Venezia is the Campidoglio Hill, one of Rome's seven hills, the ancient seat of the acropolis which is now occupied by Piazza del Campidoglio.

Designed by Michelangelo in 1536, the square is dominated by three palaces: Palazzo Senatorio, Palazzo dei Conservatori and Palazzo del Museo Capitolino. In the centre of the square is a statue of Emperor Marcus Aurelius which dates back to the II century AD.

Walking south-east along Via dei Fori Imperiali, visitors will have the opportunity to reach one of Rome's most representative landmarks, the Flavian Amphitheatre or Colosseum, which was commissioned by Emperor Vespasian in 72 AD. Deadly gladiatorial combats and wild animals fights were staged by emperors and wealthy citizens up to the VI century. Turned into a travertine quarry during the Renaissance, the Colosseum still retains its original northern side.

Next to the Colosseum is the Arch of Constantine, while south are the Baths of Caracalla, the impressive ruins of some of the largest and most beautiful bath complexes of ancient Rome. Heading north opposite Piazza Venezia is Via del Corso, Rome's major arterial route, which leads to Piazza del Popolo.

This charming street is flanked by outstanding palaces and buildings, such as Palazzo Doria-Pamphili, whose opulent rooms retain precious paintings by both Italian and foreign artists, as well as by large open spaces, such as Piazza Colonna, which in turn leads to Palazzo Montecitorio, the current seat of Italy's Chamber of Deputies. A short distance from Montecitorio along Via del Tritone is the small square hosting the popular Trevi Fountain, a theatrical 18th-century fountain situated next to Palazzo Poli. 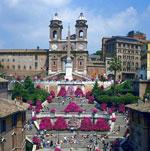 The network of narrow streets which extend north of Via del Corso forms one of the most exclusive areas in Rome, drawing droves of tourists and Romans to the elegant shops around Viale dei Condotti and Piazza di Spagna, the latter being dominated by the monumental Baroque Spanish Steps.

Further north, between Via del Corso and Via di Ripetta, are the Mausoleum of Augustus, which gathers the tombs of Augustus and his descendants, and Ara Pacis (Altar of Peace), which was built between the 13th and the 19th century AD and subsequently renovated in 1938. Painstakingly reconstructed over many years from scattered fragments, the exquisitely carved Ara Pacis celebrates the peace created throughout the Mediterranean by Emperor Augustus.

Heading west from Piazza Venezia along Corso Vittorio Emanuele II, visitors will have the opportunity to reach the Pantheon. The first temple on the site was a conventional rectangual affair created by Marco Vipsanio Agrippa in 27 BC; the present structure was built and designed by Emperor Hadrian. The temple is fronted by a massive pediment portico screening what appears to be a cylinder fused to a shallow dome. Only from the inside can the true scale and beauty of this building be appreciated: a vast hemispherical dome equal in radius to the height of the cylinder giving perfectly harmonious proportions to the building. A circular opening, the oculus, lets in the only light.

A short distance from the Pantheon is Rome's most beautiful Baroque Piazza, Piazza Navona, which is lined with palaces and pavement cafés, and punctuated by three flamboyant Baroque fountains: Fontana dei Quattro Fiumi, Bernini's most magnificent, with statues of the four great rivers of the world at that time, Fontana del Moro and Fontana del Nettuno. 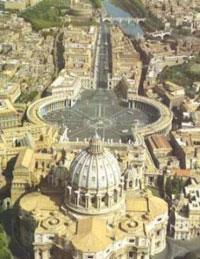 Walking east along Corso Vittorio Emanuele II, visitors will have the opportunity to reach the banks of the river Tiber and admire the massive fortress of Castel Sant’Angelo, which is easily accessible through Sant’Angelo Bridge.

Realized by Bernini, who encircled it with 4 rows of columns (which included 288 columns and 88 pillars), Piazza San Pietro provides access to the monumental Basilica of St. Peter's. Dominated by the impressive dome by Michelangelo and concluded after more than 100 years, it is Catholicism's most sacred shrine and draws millions of pilgrims and tourists from all over the world. In the Vatican City, the papal palaces, which are situated next to the great Basilica of St. Peter's, are home to the eclectic collections of the Vatican Museums.