Viterbo, the northernmost provincial capital of Latium, is situated on the slopes of the Cimini Mountains halfway between Lake Vico and Lake Bolsena.

One of the best-preserved Medieval towns in Latium, Viterbo is an important historic and artistic centre which cherishes an inestimable heritage dating back to the XII and the XIII century, when it became a free city-republic.

Under the rule of Pope Alexander IV, it became an important papal seat and experienced glorious vicissitudes. A former Etruscan centre included in the so-called Tuscia area, Viterbo makes the ideal base for discovering important Etruscan ruins and remains. When it became a Roman colony, it was connected with Rome and Florence through Via Cassia, an important Roman consular road.


The current aspect of the city has deep medieval influences, as evidenced by the impressive city walls which encircle 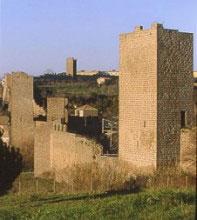 the old town. They contain typical tower-shaped buildings and feature 7 gates (which were restored in the XVI century) which provide access to the city centre.

The tour of the city could start from the central Piazza del Plebiscito, which is dominated by the 13th-century Palazzo del Podestà and a thin tower which was repeatedly renovated during the following ages. Palazzo della Prefettura, which is situated just in the heart of the square, boasts ancient origins but was almost fully renovated in 1771. Palazzo Comunale or Palazzo dei Priori, which is situated along the longest side of the square, dates back to the XV-XIV century.

Its 15th-century facade is provided with charming arches and cross windows, while the small inner courtyard cherishes a beautiful 17th-century fountain. Leaving Piazza del Plebiscito behind, visitors will have the opportunity to reach Via San Lorenzo, a narrow road which snakes across the ancient houses, monuments and buildings of the city centre.

Not to be missed are Palazzo Chigi, the Tower of Borgognone and the Romanesque architectural patterns of the Church of Gesù, which bear witness to the political and religious importance Viterbo achieved in the past centuries.

Loggia of St. Tommaso, the current seat of the Museum of the Brotherhoods. Once past the charming Bridge of the Duomo, visitors will have the opportunity to reach Piazza San Lorenzo, situated just in the heart of the oldest part of the city, which is scattered with impressive medieval monuments and buildings.


The cathedral and the papal palace, which both feature impressive architectural patterns and decorations dating back to different ages, mark the boundaries of the small Square. The cathedral, which was built in the XII century, boasts a beautiful Renaissance facade which was totally remodelled in 1570 and a charming interior which still retains original Romanesque patterns. It is flanked by an elegant black and white striped 14th-century bell tower.

The outstanding Papal Palace, which was erected in 1260, is the best example of the Gothic style from Viterbo. Its architectural structure is characterized by typical Gothic patterns, such as rampant arches and double lancet windows, and is also embellished by merloned decorations and an outstanding outer staircase.

Next to the splendid papal residence is a finely carved Loggia, which is embellished by light arches featuring thin columns which contribute to give it utmost gracefulness. The palace hosted numerous conclaves, such as the one which ended with the election of Pope Gregory X, which took place after local inhabitants cut off the cardinals the supplies to oblige them bring in their verdict. 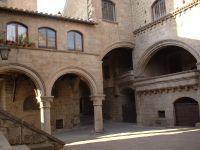 Walking down via San Lorenzo up to Piazza della Morte, it is possible to reach Via San Pellegrino.

This picturesque narrow street is the best access to the medieval quarter, which still retains the original aspect of a 13th-century village featuring impressive towers, solemn houses, imposing bridges, double lancet windows, narrow streets and mysterious nooks and crannies. The city's major highlight is Piazzetta San Pellegrino, which is commanded by the homonymous church and the sumptuous Palazzo degli Alessandri, the latter being characterized by an impressive balcony and a low arch. The well-preserved medieval town layout of the surrounding area contributes to create utmost profusion.

The best period to visit Viterbo is early September, when tourists have the possibility to discover ancient traditions and local usages and customs. On September 3, on the occasion of the patron festival of St. Rosa, local inhabitants arrange the fascinating  transport of the “Car of St. Rosa”, the 4-ton-weighing, 30-metre-high tower illuminated by thousands of lights which 90 men bring across the streets of the city centre to celebrate the translation of the body of the Saint from the Church of  St. Maria al Poggio up to the Sanctuary.

Every year, this ancient celebration is able to attract large numbers of both believers and curious tourists.
Latium is a fascinating chequerboard of ancient traditions and local usages and customs which vary from one province to another: this is especially mirrored by local gastronomy.

Viterbo is affected by plenty of external influences, such as the ones coming from the nearby regions of Tuscany and  Umbria. Among the most appreciated specialities are eels from Bolsena, anise ring-shaped cakes, struffoli (fried balls of dough) and maritozzi (a type of sweet bun).