Tarquinia rises on the top of an impressive rock spur surrounded by steep slopes, a short distance from the place where the legendary Tarchon, the founder of the city, erected the most important city of Etruria, Tarchna.

Situated 150 metres above sea level, Tarquinia's hill dominates the surrounding plain and Maremma, thus occuping some territories which were once part of the ancient Tuscia and are today included in the province of Viterbo.
The history of Tarquinia is inextricably linked with that of the Etruscans, who founded their first settlements here by putting small villages together and gradually turning them into proper built-up areas.

The origins of Tarquinia date back to prehistory, but it was only in the 10th-9th century BC that the so-called “Civita” area started gathering the community which left inestimable finds in the surrounding villages and especially in the Villanovian necropolises, thus allowing the establishment of some of the most appreciated archaeological sites in Italy.

Once achieved utmost splendour under the domain of the Tarquini dynasty, who ruled the surrounding territory from the 8th up to the 6th century, the city expanded from the Cimini Mountains up to Lake Bolsena, thus becoming a powerful commercial, political and industrial centre. After

fierce fighting carried out in order to repel the Roman attack, the city was taken over by the Romans in 308 BC.

The great Etruscan Tarquinia lost huge portions of territory and finally became a free city-republic in 90 BC.
The glorious vicissitudes experienced by the Etruscans are evidenced by the impressive remains which bear witness to the historical events which once animated the so-called “Civita”, the city's central core.

Divided into two sectors, this area gathers vast portions belonging to the oldest settlement, such as parts of the ancient city walls, the remains of typical houses and streets and the podium of a temple which dates back to the end of the 3rd century BC, the so-called Ara della Regina, the largest temple in the whole Etruria.
The most important Etruscan finds were unearthed on the top of the Monterozzi Hill, which hosts an impressive 4-kilometre-long Necropolis.

Its underground tombs date back to the period comprised between the 7th and the 1st century BC and bear witness to the importance painting had during that age, since they are scattered with outstanding frescos depicting scenes which drew inspiration from ancient painting patterns. The frescos that decorate the tombs of the Etruscan Necropolis of Tarquinia are designed to remind the dead of life and provide insight into the genuine traditions and ancient usages and customs of local inhabitants. 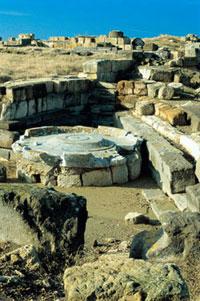 the Jugglers and the Tomb of the Leopards, which depict fascinating figures of musicians, the Tomb of the Orcus, which portrays Greek Gods, and the  Tomb of the Bulls, the latter depicting the ambush Achilles laid for Troilus.

The tombs of the Etruscan Necropolis give researchers the possibility to outline the situation of ancient decorative wall painting across five centuries. Those interested in Etruscan evidences won't miss the opportunity to visit Palazzo Vitellischi, the current seat of Tarquinia's National Museum. This outstanding Gothic - Renaissance building which was commissioned in the 15th century by cardinal Giovanni Vitelleschi cherishes one of the most important collections gathering inestimable Etruscan finds.

The entrance leads to the wonderful courtyard, which in turn leads to the upper floors. The ground floor displays decorated funerary stones dating back to the 7th and 6th century BC, as well as precious sculptures, portrays and sarcophagi.

The first floor hosts original tools from the ancient necropolis, a precious collection of both Greek and local painted vases, Bronze items, a curious Etruscan - Campanian tool and the precious high relief featuring 2 horses which once belonged to a clay frieze. The second floor gathers precious frescos which were taken from local tombs.