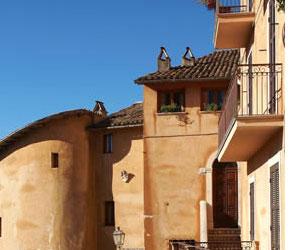 An ancient city of Latium situated in the province of Frosinone, Fiuggi was founded in the Hernic Age, when a small settlement gathering the cities of Anagni, Olibanum (Olevano Tomano), Veroli, Alatri, Ferentino, Affida (Affile), Guarcino, Boville and Piglio was established in the so-called "Felcia" area.

These mountain populations who once lived along the banks of the river Sacco settled in the higher part of the current city of Fiuggi.

Although scarce, precious finds bear witness to the important role Etruscan and Greek dominations played in the IX and VIII century BC respectively.

Today, Fiuggi's old town develops inside the ancient city walls and is crossed by fascinating narrow streets, nooks and crannies and intimate lanes which lead to the main squares. It gathers precious monuments and buildings, such as the Collegiate Church of St. Pietro in via Maggiore, which cherishes precious masterpieces dating back to ‘600; not to be missed are two ancient pagan temples dating back to the XV century, the current churches of St. Stefano and St. Maria del Colle. Among the most recent monuments, note the Renaissance Town Hall, which was built in 1925, the Art-Nouveau Villino Breda and Villa Igea Hotel in Fiuggi Fonte.

Fiuggi is famous all over the world for its Spas. The beneficial properties carried out by their waters have been known since 27 AD, as evidenced by the letters Michelangelo wrote his nephew in 1549 and by important documents by Pliny the Elder and Pope Boniface VIII.

Fiuggi's waters are widely employed for the treatment of several affections involving the urinary system. Fiuggi's thermal area is made up of Fonte Bonifacio VIII and Fonte Anticolana, and extends across 94.000 square metres. The first establishment was realized in 1905 and inaugurated in 1911. Fonte Anticolana, the most recent one, was inaugurated in the 20s. It is mainly visited in the afternoon and is situated south of the city, amidst thick woods of chestnut trees, pines and oaks.