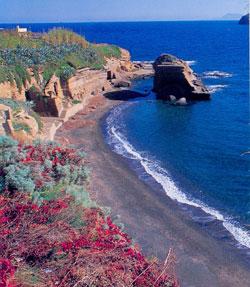 The Pontine Islands, which are also known as Ponziane Islands, are a privileged holiday destination for those flocking to the Province of Latina. The archipelago consists of two groups of islands which are separated by 22 nautical miles. The north-western group comprises Ponza and the small islands of  Palmarola, Gavi and Zannone; the south-eastern group includes Ventotene and the small islet of Santo Stefano.

The archipelago is the result of volcanic activity (except for Zannone, which is made of sedimentary and metamorphic rocks) and is characterized by enchanting natural settings featuring fascinating high cliffs, stacks and caves.

The Pontine Islands attract thousands of tourists every year; regular ferry boats and hydrofoils sail from Formia, Anzio, Terracina and San Felice Circeo. In summer, it is possible to reach the Pontine Islands from Ischia, Naples and Pozzuoli too. 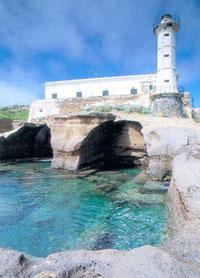 The origins of these small islands date back to the prehistory, when magma began to cool down. They were first settled by peoples looking for obsidian, by Phoenician and Greek navigators and by Roman colonizers, who turned them into isolated confinement places for Christian martyrs. The south-eastern islands, Ventotene and Santo Stefano, kept on being used as confinement places up to the XX century.

Santo Stefano is dominated by the impressive Bourbon Prison, a circular building which was erected in 1795 by Architect Carpi and was used as a confinement place for life convicts up to 1965. Both the island and its prison are easily accessible from Ventotene and are a traditional tourist mecca for excursionists flocking to the Pontine Islands.

The nearby small island of Ventotene hosted important personalities, such as the daugther of Emperor Augustus, who was sent into exile for bad behaviour. The island still retains the impressive remains of her residence, Villa Giulia in Punta Eolo. Ventotene also welcomed anarchists, political prisoners and antifascists, who joined their efforts to conceive the so-called Manifesto of Ventotene, which was written in 1942 and then spread during the years of the war. 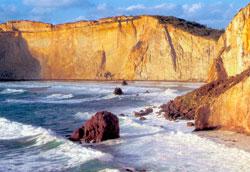 Ventotene is one of  the privileged holiday destinations for those flocking to the Pontine Islands. Its Roman harbour welcomes tourists with utmost profusion. In 1997, the Marine Natural Reserve of the Islands of Ventotene and Santo Stefano was established and still operates to safeguard the paradise of surfers and the lovers of nature. The best period to visit Ventotene is September, since it is less crowded and it is the month during which the absorbing Festival of St. Candida is held here (September 20), which terminates with the throwing of small paper balloons painted by local inhabitants.

Ponza, the largest Pontine Island, is characterized by an indented coastline and plenty of enchanting 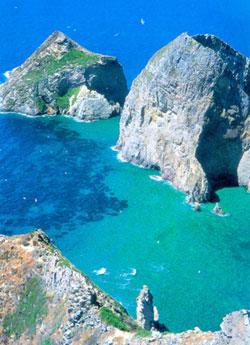 coves, inlets and bays, such as Cala di Ponza and Cala dell’Inferno, which correspond to the ancient craters. Ponza's shoal, which is scattered with ancient wrecks, is the paradise of the lovers of water sports and of expert divers. 6 miles south-east of the island is the fascinating Botte cliff.

The smallest island of the Pontine Archipelago is Gavi, a 700-metre-long rock spur populated by rabbits, scorpions, lizards and further animals.

The small island of Palmarola, which extends over little more than one square kilometre, is the westernmost island of the Pontine Archipelago. Its indented coastline gathers ancient tools dating back to the Neolithic and Eneolithic periods, which were used by primitive peoples looking for obsidian. Folco Quilici called the island “a miracle” because of its silence and sense of emptiness and its coloured rocks and beguiling sea.

North of the Pontine Islands is the small islet of Zannone, whose unspoilt landscape hosts the remains of the 14th-century Monastery of St. Spirito. It is part of the protected territories of Circeo National Park.