The province of Latina is the ideal holiday destination for those looking for utmost relax, beguiling sea, compelling beaches, absorbing cultural events and good cooking. The charming villages of the hinterland and the small towns overlooking the Tyrrhenian Sea make Agro Pontino an appreciated holiday destination for those interested in both history and genuine traditions.

Among the most beautiful resorts of the hinterland situated in the province of Latina, the small village of Sezze is home to an impressive Duomo dating back to 1364. Its outer facades still retain original Romanesque patterns, while the interior boasts precious Baroque decorations. Not to be missed is the Museum of the Toys of Mounts Lepini, which contains ancient toys, musical instruments which are still used on the occasion of Sezze's

Carnival, and “Pappalacchio" and "Peppa”, the traditional local costumes.

A short distance from Sezze is the charming resort of Priverno. Among the city's major highlights are the XII-century Cathedral of St. Maria Annunziata, fascinating medieval promenades and well-kept churches.

The small hamlet of Fossanova cherishes an outstanding historic-religious building which bears witness to the strictness of the Order of Cistercians, the imposing Abbey of Fossanova. The XII-century building is the first example of the strict Gothic-Cistercian architecture in Italy, and it was built over the foundations of a VI-century Benedictine monastery.

Priverno also boasts an interesting archaeological area which gathers the remains of the ancient village of Privernum. Tourists are also attracted by genuine local staples, such as artichokes in oil, meat, buffalo mozzarella and  falia, a particular type of bread.

Moving towards the Tyrrhenian Coast, tourists will have the possibility to admire enchanting resorts which are rich in genuine traditions, precious historical finds and outstanding natural beauties. Halfway between Sabaudia and San Felice Circeo is Circeo National Park, a protected area which contributed to the protection of the ancient  “Selva di Terracina" (Wood of Terracina), which was be included in the extensive land reclamation which took place in the 30s.

The lovers of birdwatching flocking to Sabaudia will have the opportunity to admire rare species of birds, such as

Circeo Park is crossed by plenty of cycle paths and charming itineraries surrounded by a lush vegetation which lead to the caves where Neanderthal skulls were discovered  or to the remains of the large thermal and residential complex of Emperor Domitian. The lovers of seaside holidays will have the possibility to spend pleasant moments on the compelling Coastal Dune of Sabaudia, a fascinating strip of land which is bounded by the Tyrrhenian Sea to one side and Lake Sabaudia to the other.

A privileged holiday destination for the lovers of seaside holidays, Sabaudia is also able to catch the attention of environmentalists, who are attracted by the peculiarity of its landscape, which is fully surrounded by water, and the lush vegetation of the promontory of Circeo, which offers sweeping views of the underlying beguiling sea.

Further down along the coast, just in the heart of the Gulf of Gaeta, is Terracina, a popular seaside resort which is scattered with important archaeological and artistic sites. It gathers impressive temples, ancient spas and outstanding Roman buildings. The Temple of Giove Anxur and Capitolium and Nettunie Spas are the city's major highlights, while the Civic Archaeological Museum stands out as an interesting educational journey across

Terracina's finds. A short distance from the city centre is the XVIII-century Porta Napoli, the impressive gate which once marked the watershed between the Papal States and the Kingdom of Naples.


The Gulf of Gaeta attracts large numbers of tourists too. Sperlonga was one of the most appreciated lidos during the Roman Age and it is still regarded to be one of the most beautiful villages in Italy. Walking down the coastline, visitors will have the opportunity to discover its wonderful natural caves, the so-called Speluncae, which give the city its name. The surrounding area was a favourite retreat for the ancient Romans during the hot summer months. They built villas along the coast, and converted the natural caves in the nearby cliffs into places to dine and relax.  Not to be missed is the huge complex of Tiberius' luxury villa, which cherishes some marvellous Hellenistic sculptures in a large cave open to the sea.

These sculptures, representing incidents from Homer's Odyssey, attract thousands of visitors every year. Note also the impressive Truglia Tower, which once belonged to a defensive bulwark dating back 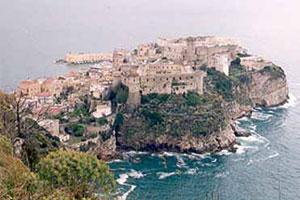 to the XVI century. The white stone and strict architectural patterns of the tower, along with its privileged panoramic position over the sea, make it a fascinating place conveying utmost profusion.

Further south is Gaeta, which is scattered with precious historical evidences, such as the narrow medieval streets which lead to the castle and important Roman finds. Tourists flocking to Gaeta will have the opportunity to enjoy its compelling beaches, admire the natural beauties cherished by the Regional Park Riviera of Ulysses and taste genuine local staples, such as olive oil and the traditional pizza from Gaeta, the so-called Tiella.