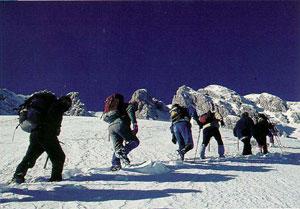 The impressive peaks of Mount Terminillo, which is known as the Mountain of Rome, rise at an altitude of 2216 metres above sea level. Situated only 20 kilometres far from Rieti and 100 kilometres far from Rome, this Apennine winter resort has developed as a popular tourist destination since the Thirties, when Mussolini commissioned the building of Strada Statale 4 bis del Terminillo which connected Rieti with the massif.

Unlike the nearby Apennine resorts of Abruzzo, Terminillo features utmost elegance and fine environments, which have been the keys to its success since the 50s .

Before being transformed into a popular tourist destination, Rieti's peaks had been inhabited by shepherds, woodmen and charcoal burners. The only shelter was situated at an altitude of 1615 metres above sea level and could only be reached on a mule through a rough mule track, while a small wooden structure dedicated to Umberto I was situated

2000 metres above sea level and was only reached by daring climbers.

Since the 20s - 30s, Terminillo has become a privileged holiday destination for rich families from Rome and the surrounding area, and new shelters, restaurants, ski tows and villas were built. Renovation works were carried out by the acclaimed engineer Parboni, who set the guidelines for an ecological plan featuring a sober mountain style and environmental-friendly materials, such as wood and carved stone.
During the 50s, 60s and 70s, the winter resort turned into one of the most appreciated holiday destinations for actors and celebrities. Among the most glamorous events which occurred here, not to be missed is the wedding of Gina Lollobrigida and Mirko Skofic, which took place in the small Church of the Alpine troops. 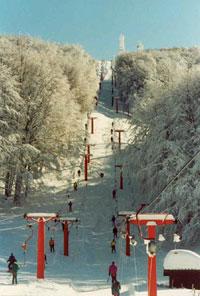 Today, this glamorous mountain resort is equipped with modern ski-lift facilities, which are situated between 1500 and 2100 metres above sea level, comfortable accommodation facilities and entertaining attractions. The latest renovation works, which took place between 2005 and 2007, were carried out in order to enlarge Alpine skiing slopes and create new cross-country trails, the latter being the first ones in Italy to be provided with proper illumination systems.

The lovers of nature will have the opportunity to go for pleasant walks across charming itineraries amidst the lush vegetation of the valley and to breath pure air while enjoying sweeping views over famous historical and cultural sights, archaeological sites, lakes, spas and impressive artworks and monuments.

Not to be missed are the exciting sports opportunities offered by the surrounding area and its well-equipped sports centre provided with football pitch, five-a-side football pitch, athletics track, tennis courts and outdoor swimming pool. This modern facility is complemented by plenty of skating rinks and racetracks, Squirrel Park Terminillo and  Leonessa Adventure Park, the latter gathering targeted climbing paths and well-equipped outdoor spaces.