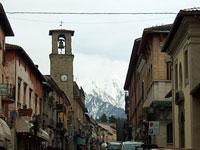 Amatrice, a small municipality situated in the province of Rieti, gathers an inestimable naturalistic, environmental, historical and cultural heritage. Its green plain, which has been included in the National Park of Gran Sasso and Monti della Laga since 1991, develops just in the heart of a charming plateau situated about 1000 metres above sea level. One of the highest peaks of the surrounding territory is Mount Gorzano (2458 m), Latium's highest mountain.

The lovers of nature, open-air activities and mountain landscapes should flock here during spring or autumn, when the footpaths which lead to the mountains are easily accessible and offer breathtaking views over the surrounding territory: green meadows, broad-leaved woods situated 1800 metres above sea level and lush expanses of wild lilies and orange and yellow Spanish broom. Streams, springs and waterfalls, which during winter create fascinating ice landscapes, provide a charming backdrop for pleasant summer walks.

The lovers of birdwatching should head to the so-called Selva Grande, whose thick woods of beech trees are 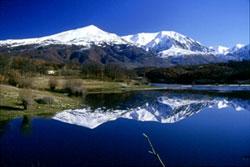 populated by rare species of birds, while expert fishermen will have the opportunity to perform their favourite activity in enchanting expanses of water, natural lakes, such as the small lakes of Agro Negro, and artificial basins, such as the famous Lake Sandarello. Walking across Amatrice's fascinating environs, tourists will have the possibility to admire stunning sights and discover precious evidences which bear witness to past glorious vicissitudes.

The tiny hamlets which surround the city centre still retain ancient gates, defensive walls, churches and medieval narrow streets.
The ancient origins of Amatrice's first settlement, which was established during the pre-Roman Age, are evidenced by the numerous finds which were unearthed in the nearby resort of Saletta. The most important finds dating back to the Roman Age and the subsequent centuries are cherished by Nicola Filotesio Civic Museum.

Nicola Filotesio (better known as Cola dell'Amatrice), a local painter, sculptur and architect who lived between ‘400 and '500, realized impressive masterpieces and public works.
The tour of Amatrice could start from the city's major arterial route, Corso Umberto I, and then go on across the narrow streets which lead to the remains of ancient medieval walls, 14th- and 15th-century churches and the monumental Civic Tower which dominates the city.

Amatrice's old town, which is wholly encircled by ancient medieval walls, is portrayed in a famous fresco

realized in 1492, which depicts a “Madonna in Throne who holds up the city of Amatrice”. Incredibly well-preserved, it is cherished by the Church of Icona Passatora, which is situated about 4 kilometres far from Amatrice. The lovers of sacred art will have the opportunity to explore Amatrice's city centre and the nearby fascinating hamlets.

Besides the Sanctuary of Icona Passatora, a 15th-century church embellished by impressive frescos, Amatrice also boasts the monumental complex of St. Francesco, which is crowned by a wonderful Gothic gate, and the Church of St. Agostino, which is situated a short distance from one of the major entrance gates of the 14th-century city walls. The Civic Museum cherishes the city's most important artworks, such as paintings by Cola dell’Amatrice and impressive crosses sculptured by Pietro Vannini.

Not to be missed is the traditional cooking from Amatrice: pasta all’amatriciana, which is even celebrated during a funny folk festival which is held here towards the end of  August, meat, sheep cheeses and further genuine local staples cooked according to ancient recipes and traditions.