The origins of the Sanctuary of Loreto date back to December 10, 1294, when the Holy House was brought to Italy from Nazareth. According to eminent researchers, the house reached Ancona by sea, while legend has it that the house in which Mary had received the annunciation that she would have borne the child Jesus, threatened with destruction by the Turks, miraculously uprooted itself from the Holy Land and was brough by angels to a laurel grove (Loreto) south of Ancona.

Extensive research carried out on the building materials seem to confirm their Palestinian origin. The walls of Loreto's Holy House were built with sandstone bricks, which were used to realize nearly every building in the Holy Land, and the mortar used to put together the stones was made up of materials which did not exist in the Marches, but were typical of Nazareth. The paintings and graffiti over the walls depict the pilgrimage of the believers who visited the house before 1291 and the iconography of the saints corresponds to the one used by the Oriental church.

A further research takes into account the size of the house, which perfectly matches the space left in the rock where the house is said to have been situated in 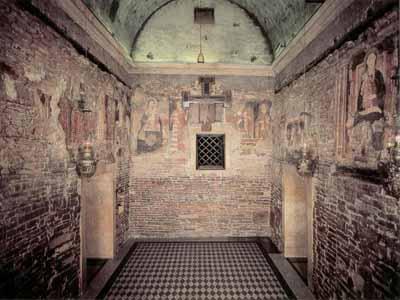 Palestine.
Under the opening known as Window of the Angel is a XIII-century Wooden crucifix by the Tuscan painter Giunta Pisano.

Inside the Holy House is the famous Black Madonna, which has attracted thousands of pilgrims from all over the world for more than seven centuries. Originally it was an Oriental wooden icon depicting the Madonna, but in the XIV century it was replaced by the statue of the Virgin of Loreto, covered with a mantle known as “dalmatic”, which was commissioned by Pope Pio XI in Lebanon cedar from the Vatican Gardens. Following the big fire of 1921, the statue was replaced by a copy realized according to the original model.

Every year, during the night of December 10, the hills surrounding Loreto light up with fires which symbolize the light of the Annunciation and the hope which man apply to the Virgin with. Plenty of pilgrims follow the lights to the Holy House while repeating “Loreto is our house”.

The Basilica of Loreto, which was built around the Holy House, was frescoed in ‘500 by important artists, such as Luca Signorelli and Melozzo da Forlì, while its external structure was designed by Donato Bramante. The bell tower designed by Luigi Vanvitelli dominates Piazza della Madonna, which also hosts the Apostolic Palace, the current seat of a Museum and the civic Art Gallery. It cherishes rich collections of ceramics and memorabilia, as well as 8 paintings by Lorenzo Lotto dating back to the early ‘500 which, together with the frescos, sculptures and architectures of the Basilica, make Loreto an important religious, cultural and historic destination.