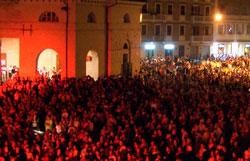 Senigallia was listed among the “capitals of Italian cooking” thanks to skilled chefs, who are able to suit even visitors’ most demanding requirements, and tasty local staples.

Not to be missed are the numerous hotels in Senigallia whose restaurants serve local delicacies, original dishes, fish specialities, genuine food and tasty recipes. Traditional cooking from the Marches is famous all over the world for the dazzling array of tasty ingredients and fine wines it boasts.

The most important food and wine event is “Pane Nostrum”, the international bread festival. During the celebrations, only traditional bread from the Marches is taken out of the oven, such as the so-called Bread of Duke, Emmer Bread, Organic Bread and many more. Even twinned cities take part in the event, promoting their traditional bread.

It is usually held every year around mid September and hotels are crowded with curious people flocking here from all over the world to attend it. Dishes are accompanied by high-quality local staples, such as oil. Olive-growing is very widespread here and in November it is celebrated through the so-called “Bread and Oil in Oil Mill” event.

Gourmets know a spoon of oil seasons both traditional specialities and local staples, cheeses and cold pork meat and salami, beans with pork rinds, fried cod, dried cod and many more. Senigallia is a popular seaside resort whose cooking is based on mouth-watering fish specialities, such as fried fish from the Adriatic Sea and grilled fish.

Fish lovers won’t miss the opportunity to take part in “Azzurro come il  mare” (Light blue like sea), a food and wine festival which gives tourists the opportunity to taste traditional recipes based on sardines, mackerels and grey mullets. Skilled chefs illustrate the characteristics of every fish, indicate the periods of the year when it is possible to fish them and cook tasty dishes. This event, which is organized by the local municipality, in usually held in spring.