In the neighbourhoods of Macerata are numerous well-preserved archaeological sites dating back to the Roman Age which have been able to attract large numbers of visitors for several years now. 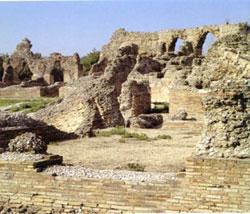 6 kilometres far from the centre of Macerata, in the small hamlet of Villa Potenza, are the ruins of Helvia Ricina, which is also known as Ricina since it was mentioned with that name by Pliny the Elder (Naturalis Historia, I century AD).

The town was situated at the crossroads of two important roads, Nuceria-Ancona and Salaria Gallica, which connected Ascoli with Jesi. According to some researchers, Helvia Ricina was the original settlement from which the city of Macerata originated. The archaeological excavations which were carried out here only partially unearthed the remains of the ancient Roman city.

One of the most representative sights is the theatre, which was built in the II century AC according to the architectural patterns of the classic Roman theatre, as evidenced by the spaces dedicated to the orchestra, the cavea (a semicircular stand for spectators) and the brick frontispiece (the monumental facade which marked the boundary of the proscenium).

Mosaics, paved roads and aqueducts date back to the same period. After the invasion of the Goths, between the V and the VI century, the town was abondoned and most of the walls, marble decorations, coins and finds dating back to the Roman Age were sacked.

The archaeological park of Urbs Salvia, the most important and best-preserved in the

Marches, is situated 13 kilometres far from Macerata, a short distance from the current town of Urbisaglia. The building of the city dates back to the period between the Augustus and the Tiberius Ages. The tour across the archaeological park of Urbs Salvia follows the sweet slopes of the gentle hill, thus allowing tourists to enjoy an oustanding view over the typical Roman city.

From the top, through a narrow passage, it is possible to reach the Tank where the water of the aqueduct was gathered. Down is the theatre, one of the largest in Italy and the only one which still retains remains of painted plaster. It was commissioned by Consul Gaio Fufio Gemino before 23 AD and was built on the surrounding gentle hill according to Greek architectural patterns. Excavations carried out around the theatre unearthed a head of Apollo and two acephalous statutes which are currently cherished by Urbisaglia's Civic Archaeological Museum.

The plain was the seat of the sacred area, as evidenced by two temples which were discovered here. The largest one, which is named after Salus Augusta, is surrounded by a portico which still retains interesting frescos featuring iconographies linked to the Augustan propaganda, as well as animals and lunar schemes.

Crossing the impressive walls, whose highest point is 5 metres high, it is possible to reach the Amphitheatre built in the Flavian Age (75-76 AD), which still retains its elliptic perimeter up to the first series of staircases and which once could host up to 5000 spectators. It still hosts theatrical performances in the months of July and August.

Other important archaeological sites in the province of Macerata are Matelica and Septempeda.
In the I century BC, Matelica was a Roman Municipium and the excavations which were carried out here unearthed interesting remains of Roman houses and baths. It is possible to visit the finds cherished by the vaults of Piermarini theatre and the rear of Ottoni Palace, while Piersanti Museum and the Municipal Palace cherish interesting inscriptions.

Septempeda cherishes inestimable finds, still partially buried, which were discovered along the walls of the ancient town. The excavations carried out near the Medieval church of St. Maria della Pieve unearthed important baths with frigidarium and calidarium, remains of houses decorated with both polychromatic or black and white mosaics and both Hellenistic and Roman necropoles. Part of these finds are currently cherished by the Civic Museum of Septempeda.