Ascoli Piceno, a provincial capital of the Marches, was founded by the Piceni tribe, an Italic population who controlled a wide area of the Middle Adriatic situated between the Marches and Abruzzo during the IX century BC. Intentioned to control the important road which connected the Tyrrhenian with the Adriatic Sea, the Salaria consular road, the Romans struck several commercial agreements with the Piceni tribe up to 89 BC, when they eventually succeded in conquering the city. Ascoli experienced its golden age under Emperor Augustus, who commissioned splendid aristocratic residences, temples, theatres, spas, bridges and fortresses. 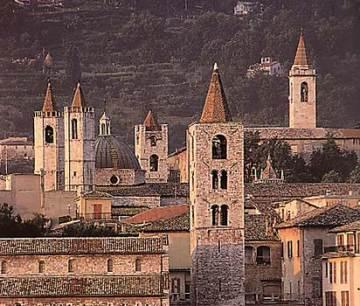 here bear witness to the size of the ancient settlement of the Piceni tribe. Crockery and glassware, weapons, pieces of jewellery and an important funeral stele of Castignano are currently cherished by Ascoli's Civic Archaeological Museum. The museum also cherishes beautiful mosaic floors which were part of ancient Roman domuses.

The city boasts numerous evidences which were unearthed during the excavation works performed in the surrounding area, ranging from the yard around the Roman theatre to the Gemina gate, the most ancient one in the city, and Augustus bridge (1° century BC), one of the best-preserved Roman bridges which still connects two sides of the city.

Even Lombards left their mark over the territory, as evidenced by the VI-century Necropolis of Castel Trosino which was discovered in the neighbourhoods of the city. The Archaeological Museum cherishes archaeological finds, memorabilia and both men's and women's items of clothing.

Apart from the fortresses and gates to the town, Ascoli also cherishes other Medieval patterns, such as the towers from the top of which local aristocrats wielded their power. Of the 200 original towers, some 50 can still be seen, such as the 35-metre-high Tower of Ercolani, which is situated next to the Roman building known as Longobardo (Lombard palace). Others were employed as the bell towers of churches which were subsequently built, such as the Tower of St. Venanzio, which is situated next to the homonymous church, or the travertine Twin Towers, which were built in the XII century and are currently situated in front of the church of St. Agostino.

Not to be missed is a charming walk across the ancient narrow streets, which lead from the gate of Borgo Solestà up to the district known as “rrete li mierghie”, which is situated behind the Medieval merlons which once dominated the city walls while overlooking the river Tronto. The harmonious aspect of the amber-coloured

buildings of Ascoli Piceno is due to the use of Travertine, a building material which has been manufactured by local workshops for more than two thousand years.

The quarries of St. Marco, Rosara and Acquasanta Terme, which are situated a short distance from the city centre, are still employed and provide local artisans the raw materials they use to unearth the traditions they were handed down from their ancestors.

Other features worthy of note in the old town of Ascoli Piceno are the inscriptions carved in the architraves of the doors of many palaces. Such a custom originated during the Renaissance, when Ascoli experienced extraordinary cultural liveliness. Between Corso Mazzini and via Solderini are hundreds of aphorisms, proverbs, quotations and traditional sayings, written both in Latin and the vulgar tongue.

Since the period of the Medieval city-republics, the political and religious centre of Ascoli Piceno has developed around two squares, Piazza del Popolo and Piazza Arringo. The combination of styles which characterizes Ascoli Piceno, from the Gothic architecture of the Church of Saint Francis to the sixteenth-century Loggia dei Mercanti (Loggia of the Merchants), which are both situated in the first square, and from the stratified Cathedral of S. Emidio to the outstanding example of Romanesque architecture of the Baptistry of St. Giovanni, which are located in the second square, gives tourists the possibility to become aware of the numerous historic vicissitudes experienced by the city.

The former centre of political power during the Middle Ages, Palazzo dell’Arengo, situated in Piazza Arringo, is the current seat of the rich collection of the Civic Art Gallery, one of the most important in central Italy. Not to be missed are paintings by Carlo Crivelli, Pietro Alamanno, Niccolò IV, Tiziano, Guido Reni, Luca Giordano, Carlo Maratta, Domenico Morelli and Pellizza da Volpedo, as well as outstanding collections of ceramics and music instruments.