Mounts Sibillini are part of the Central Apennines and extend between the Marches and Umbria. The massif includes Mount Vettore, the highest peak, Mount Priora, Mount Bove and Mount Sibilla, the latter giving its name to the whole mountain range. Legend has it that the famous prophetess Sibilla lived in a cave situated on the slopes of the mount which is named after her, and knights errant, wizards and pilgrims flocked here to try to solve her oracle. 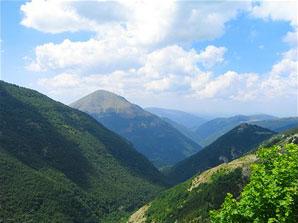 Mounts Sibillini consist of calcareous rocks and their highest peaks reach about 2500 metres of height. Thanks to the outstanding flora and fauna heritage it cherishes, the park has been included into the list of Italian natural parks since 1993, and today it is a protected area.

Among the most important vegetal species the park hosts are woods of downy oak, hornbeam and manna ash at a low altitude and beechwoods at a high altitude; on the tops of the highest peaks are high pastures and rare plants, such as Leontopodium alpinum, better known as Edelweiss.

Among the most widespread animal species are wolves, wildcats, crested purcupines and roe deers, while red deers and chamoises have been reintroduced through targeted activities of environmental protection. Among the reptiles, the European asp and the meadow viper are worthy of mention. Many birds nest inside the park; among the most widespread are golden eagles, goshawks, sparrowhawks, peregrine falcons and eagle owls.

The unspoiled natural environment the park cherishes fostered the development of equipped sports facilities, which give tourists the possibility to enjoy the outstanding landscapes of the Natural Park of Mounts Sibillini all year round. They can take part in the interesting horse rides which are organized by the 5 local riding grounds or go for wonderful walks across the different paths they can select according to 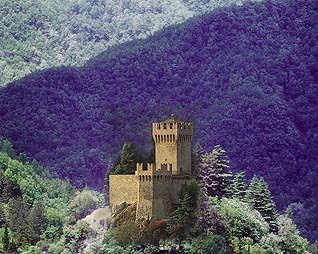 their personal interests and skills.

Historic routes lead tourists to charming Medieval villages which are situated on the slopes of Mounts Sibillini, while trekking excursions let them discover high pastures and tilled lands. Skilled excursionists can also set out on extreme paths which lead them to the highest peaks, thus enjoying a closer touch with nature.

The Official Guides of the Park provide detailed information about the mountains and the surrounding environmental features. Not to be missed is the Path of Grande Anello dei Sibillini (Great Ring of Mounts Sibillini), a 120-km-long path to be performed in nine days across the whole of the mountain range of Mounts Sibillini.

Another interesting way to visit the Natural Park of Mounts Sibillini is by mountain-bike, cycling along the ancient paths which were once built by farmers, woodmen and shepherds. The main itineraries to be performed by bike are 14, each of them can be covered in one day.
Among the most charming municipalities situated on the slopes of Mounts Sibillini in the province of Ascoli Piceno not to be missed is Arquata del Tronto. This small village is the only municipality in Europe to be encircled by two National Parks, the Park of Gran Sasso and Monti della Laga to the south and the Park of Mounts Sibillini to the north.