A small village situated just across the border between Emilia-Romagna and the Marches, Gradara and its castle were the background of the tragedy of Paolo and Francesca, who are famous all over the world for the lines Dante wrote about them in the Hell of his Divine Comedy.

Surrounded by impressive city walls, the small town develops around its fortress, which is enclosed by walls too. The Castle of Gradara, which rises 140 metres above sea level on the top of a panoramic hill, still retains evidences which bear witness to the historic vicissitudes it experienced under the domination of the Malatesta, Sforza and Della Rovere families.

The first sections of the current building were commissioned by Pietro and Ridolfo De Grifo in the 12th century, but early in the 13th century the tower was taken over by Malatesta from Verrucchio the Centenary, who turned it into the keep of the Fortress. 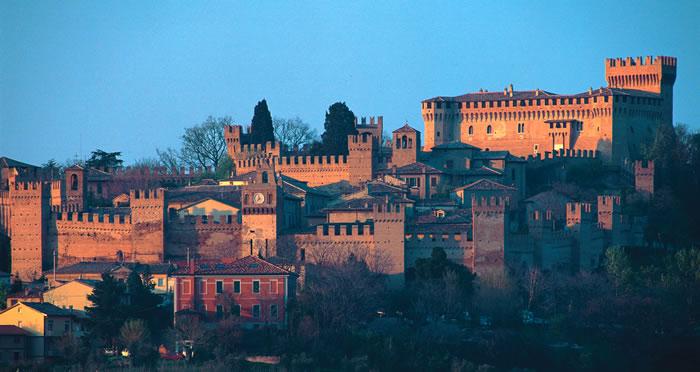 In 1289 the castle was the stage of the tragedy of Paolo and Francesca, the sad story of two lovers who were killed by Giangiotto Malatesta, husband of Francesca and brother of Paolo. The story, that actually happened, tells of a deception by the father of Francesca da Polenta, Guido Minore, Lord of Ravenna and Cervia, who offered his daughter's hand in marriage to Giovanni Malatesta, called Giangiotto, an older, lame and ugly man.

Supported by the Malatesta family, he invited the young and handsome Paolo Malatesta, the brother of Giangiotto, in Ravenna, where he accepted to be given as the fiancé. On the wedding day Paolo made the promise of marriage on behalf of his brother Giangiotto without the knowledge of the poor Francesca. Once the deception was discovered, she resigned to her fate before falling in love and having an affair with the handsome Paolo. Caught by Giangiotto while kissing, they were both murdered.

After the Malatesta domination, the Fortress was taken over by the Sforza and Della Rovere families, before being given to the Papal States, the municipality and private owners.

The last important restoration carried out in 1920 brought the castle back to its ancient magnificence.
Tourists can visit the Castle of Gradara, stroll along its embattled walls, admire the drawbridge and walk across its beautiful courtyard, thus enjoying the fascination of all the historic periods and personalities which left their mark here.