Senigallia, an artistic city in the Marches 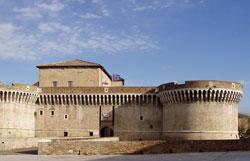 Senigallia is an artistic city which offers those interested in discovering the history of the Marches plenty of amazing opportunities: they can visit impressive castles, admire outstanding monuments and spend their holidays in a charming resort featuring high-quality tourist services and facilities.

The famous Roveresca Fortress rises in Viale Gioacchino Antonio Rossini, a short distance from the main hotels of the city. It was commissioned in 1474 by the Lord of the city, Giovanni Della Rovere, designed by the famous architect Luciano Laurana and erected by Baccio Pontelli.

Its peculiarity lies on the fact it contains two fortresses: a smaller inner fortress which was the residence of the lords and a larger fortress encircling the inner one which suited defensive purposes. The fortress offers tourists deep insights into the numerous roles it has played throughout the centuries. It was a fortress, an aristocratic residence, a children’s home (in 1631), a prison and a school of artillery under the rule of Guidobaldo Della Rovere. Today, it is the venue for important art exhibitions and cultural events.

The Ducal Palace, the current seat of the Town Hall and the Museum of Modern Art, is situated less than 1 km far from the Roveresca Fortress, just in the heart of Via Battisti. It is an aristocratic residence designed by Gerolamo Genga in the XVI century.  It still retains an imposing white stone portal, and the inner Hall of Throne cherishes an impressive wooden ceiling featuring paintings by Taddeo Zuccari, a famous Italian exponent of the Roman Mannerism. The square which surrounds the Ducal Palace once hosted parades and military exercises. Due to the commemorative importance of the square, the so-called “Fountains of the Ducks” was erected in a decentralized position.

This artistic city gathers a remarkably wide array of evidences dating back to the period when the city was ruled by the Della Rovere family. Not to be missed is Palazzetto Baviera, which cherishes outstanding stuccos which were realized by the famous plastic artist Federico Brandani (1522/1525-1575) in 1590. The central Piazza Roma is easily accessible from any hotel.

It is dominated by the seventeenth-century Palazzo del Governo, which was designed by the architect Muzio Oddi from Urbino. The surrounding square is commanded by the beautiful Fountain of Neptune and the impressive facade of the residence of Giulio Carlo Fagnani, a famous mathematician from Senigallia. Art and culture permeate the whole of the city. Not to be missed are the precious memorabilia collected by Pope Pius IX, which are cherished inside Palazzo Mastai. In Senigallia art and everyday life merge in pleasant harmony.

Walking down the streets of the city centre, visitors will have the opportunity to enjoy the picturesque fish, fruit and vegetable market which takes place inside Foro Annonario, an impressive Neoclassical brick building whose inner rooms host the Municipal Library and Archives. Portici Ercolani, which flank the right bank of the river Misa, were built to suit commercial purposes. They are made up of 126 arches built in Istrian stone which were the traditional gathering place for local traders.

Senigallia is also home to ancient churches, such as the Church of the Cross, the Church of Mary Magdalene and the Church of St. Martin, the latter being concluded in 1740 and cherishing important paintings: “Madonna and Child” and “St. Anne” by Guercino, ”Madonna and Saints” by Nicola Bertuzzi and paintings by Palma il giovane, Terenzio Passerini and Ercole Guerrieri il giovane. A little further down, tourists come to the popular Duomo, the fourth cathedral of the city, which is situated in Piazza Garibaldi and is decorated with inestimable works of art by the most important exponents of Italian Mannerism.