Frasassi's Caves, which are situated in the municipality of Genga, in the province of Ancona, are underground karstic caves which are included in the Regional Natural Park of Gola della Rossa and Frasassi and are among the most beautiful natural attractions of the hinterland of the Marches. 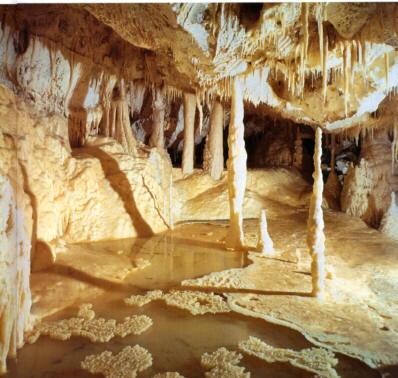 , Frasassi's caves were opened to the general public in 1974. Since then, over 10 million people have crossed the 1-kilometre-long path which corresponds to the part of the caves which was made accessible to visitors; the whole path is about 18 kilometres long and features a complex system of underground caves where only skilled speleologists can venture.

The entrance to the underground world of Frassasi's caves, which are sheltered by Mount Vallemontagnana, is a 200-metre-long tunnel hollowed out in the rock which leads to Frassasi's Gorge. The itinerary lasts about 1 hour and the path was made comfortable and well-lit by the popular designer Cesarini from Senigallia.

The silence which envelops visitors makes the oustanding natural scenery even more fascinating. Small lakes, deep wells, engraved stalactites, bright stalagmites and natural sculptures made up of calcareous stratifications have been hollowed out by water and protected by atmospheric conditions for more than 190 million years.

Odd formations were given curious names by speleologists, such as ’“Obelisk” a 15-metre-high stalagmite, the “Organ Pipes” conical-lamellar concretions which, if hit, ring out, and the “room of the small candles”, where the soil is fully covered with small cylindrical stalagmites similar to little candles.

Frasassi's caves catalyse the main economic activities of the municipality of Genga, which offers tourists a wide range of accommodation facilities which are able to suit even their most demanding requirements. The sulphur waters which flow out from Frasassi's Gorge, provided with excellent curative properties, feed the swimming pools of the Spas of San Vittore. Among the most important events organized by the municipality of Genga, not to be missed is the Living Crib, which is performed along the main road which leads to the cave where the Sanctuary of Madonna di Frasassi, realized by the French architect Valadier, is situated.