The hilly region of Franciacorta, which is famous all over the world for the production of DOCG sparkling white wines, is situated halfway between Brescia's city centre and the southern banks of Lake Iseo.

Its name derives from ancient medieval laws which stated these territories, which were inhabited by Benedictine monks, should be “Curtes francae”, that is to say free from taxes. Impressive monasteries, abbeys, castles and villas dating back to that period bear witness to the architectural splendour the surrounding area achieved during the past centuries.

The wine tradition of these lands dates back to a previous age, as evidenced by precious archaeological remains and outstanding works of art by Classic authors, such as Pliny and Virgil. The provincial territory currently hosts almost 100 cellars, which are important highlights for those interested in exploring the famous Franciacorta wine route.

The vine which develops around Cellatica, the oldest one in Franciacorta, has been known since the Roman Age. The small village of Cellatica is situated only 7 kilometres far from Brescia and gives tourists the possibility to discover a charming itinerary gathering culture and flavours. Apart from hosting some popular cellars, Cellatica is also home to a XVI-century Duomo which cherishes the "Last Supper" by the Romanino school.

Heading west, it is possible to reach Rodengo-Saiano, a traditional gathering place for the lovers of fine wines and those interested in history and culture. The Olivetan Abbey of St. Nicola is a sumptuous complex which was erected in the XI century; the church dates back to the XV century and cherishes precious works of art, frescos and paintings by Moretto, Romanino, Foppa and further acclaimed artists from Brescia who lived in the early sixteenth century.

Heading west along the Provincial Road which leads to Lake Iseo, it is possible to reach Passirano, which  is dominated by a X-century merloned castle like the nearby Bornato. Not to be missed are Cazzago San Martino and, further south, Rovato and Coccaglio, charming villages featuring cosy old towns and ancient cellars.

Heading north, it is possible to reach one of the most important wine-growing centres of Franciacorta, Erbusco, which is the seat of Franciacorta's Wine Route Association and the Consortium for the Safeguard of Franciacorta. Extensive excavation works unearthed precious Roman and prehistoric finds.  The city also hosts the Parish Church of St. Maria and the sumptuous Villa Lechi by Palladio, which attract large numbers of tourists too.

The nearby Nigoline houses one of the most prestigious fifteenth-century aristocratic residences of Franciacorta, Palazzo Monti della Corte. The tiny village is situated a short distance from the elegant Franciacorta Golf Club, one of the largest golf clubs in Italy which gathers nine courses surrounded by thick woods and charming lakes.

Once reached the banks of Lake Iseo, it is possible to reach Paratico, a charming lakeside village dominated by the impressive remains of the ancient Lantieri Castle, or head east. Once past Provaglio d’Iseo, the seat of the medieval monastery of St. Pietro in Lamosa and a privileged lookout  point over the so-called Torbiere, large marshes populated by rare species of fish and aquatic birds, it is possible to reach Monticelli Brusati, an ancient village featuring charming hilly landscapes and ancient vines. This small centre is home to prestigious cellars and lush footpaths which snake across green meadows and crystal-clear streams. Not to be missed is the rough path which leads to the Monticellii Waterfalls. The Sanctuary of Madonna della Rosa, a beautiful  XV-century building decorated with precious frescos, rises in a privileged position on the top of a 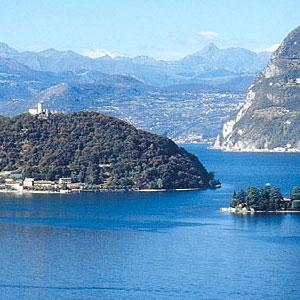 The banks of Lake Iseo are dotted with lush vines, orchards, olive groves, scented flowers, thick woods and green hills which contribute to give the surrounding area utmost profusion. The lake is named after the tiny town of Iseo, an ancient fishing village which is now Lake Iseo's major centre. Not to be missed is the visit of the XII-century Romanesque Parish Church of St. Andrea.

The thriving centres situated in the province of Brescia and Bergamo which punctuate the banks of the lake offer tourists the possibility to perform plenty of different sports activities, such as sailing, windsurfing and sports fishing. During summer, Lake Iseo also hosts international sailing competitions and boat races.

Iseo and the neraby Sulzano are the traditional landing places of ferry boats to Monte Isola or Montisola, the largest lake island in central-southern Europe, a peaceful oasis dominated by a charming hill carpeted with lush woods, orchards and olive groves. The lower part is inhabited by local fishermen. The island is known for the production of fishing nets and tasty fish specialities.

Heading north from Sulzano, it is possible to reach Sale Marasino, which gathers sumptuous sixteenth-century palaces and the Parish Church of St. Zenone. Not to be missed is the charming village of Zone, which is situated on the top of the impressive mountains which overlook Marone. Tourists will have the possibility to admire the so-called fate di Pietra (stone fairies), high needles surmounted by heavy rocks. Final step is Pisogne, situated north of Lake Iseo, which is dominated by the fifteenth-century church of St. Maria della Neve, which cherishes one of the most precious fresco cycles by Romanino.