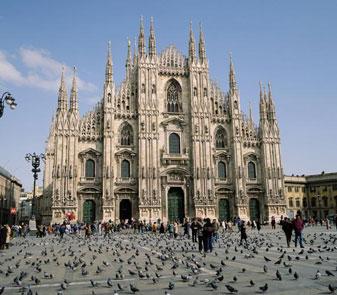 Milan gathers an inestimable artistic and cultural heritage, as well as large exhibition spaces dedicated to special shows, displays and events. Hundreds of thousands of tourists who flock to Milan all year round will have the opportunity to stay at comfortable accommodation facilities situated in the old town, charming hotels situated a short distance from the major cultural and tourist highlights or cheap guesthouses situated on the outskirts of the city, which are easily accessible by public means of transport.

The crowded Piazza del Duomo, which is Milan's main gathering place, makes the ideal base for beginning the tour of the city. The Duomo, an impressive Gothic building which is topped by the famous statue of Madonnina, is one of the most appreciated monuments in Italy.

The outer staircase leads to the terraces, a fascinating path across spires, pinnacles and statues which leads up to Madonnina and gives tourists the possibility to enjoy breathtaking views over the whole of the city. On one side of Piazza Duomo is the Royal Palace, which overlooks a picturesque small square. The Royal Palace hosts the Museum of the Duomo, which gathers 21 rooms dedicated to the Lombard, French and Rhenish Gothic Art, and the Civic Museum of Contemporary Art, which contains a rich collection of artworks which have been realized since 1900 by the most famous Italian artists.

South of Piazza del Duomo, just in front of the facade of the church, is another important square, Piazza Mercanti, which leads to Via Mercanti and is peppered with important evidences dating back to the Middle Ages. Palazzo della Ragione, which was erected in 1200, was Milan's main gathering place together with Loggia degli Osii (1316) and further impressive buildings and palaces. Palazzo dei Giureconsulti in Via dei Mercanti is an interesting building which was designed in 1500 by Galeazzo Alessi, a famous Umbrian architect who participated in the building of the Duomo and Palazzo Marino, the current seat of Milan's Town Hall.

It is situated in the nearby Piazza della Scala, which is easily accessible from Piazza Duomo through Vittorio Emanuele II Gallery, which gathers traditional cafeterias, restaurants and shops and is one of the privileged gathering places for both tourists and local inhabitants. Piazza della Scala is dominated by the Neoclassical Scala Theatre, one of the most famous opera houses in the world. A busy calendar of shows and events gives visitors the possibility to attend extraordinary representations, concerts and performances all year round.

The tour could continue with the visit of the church of St. Fedele, a glorious example of Renaissance architecture. Behind it is Casa degli Omenoni, an elegant residence dating back to the sixteenth century whose facade is embellished by impressive statues. A short distance from it is the Neoclassical Palazzo Belgioioso and Manzoni Museum, which is hosted inside a brick building which was once the residence of Alessandro Manzoni.

Situated at the end of the street, Poldi-Pezzoli Museum gathers inestimable ancient, medieval and Renaissance works of art. It overlooks Via A. Manzoni, which in turn leads to the Manzoni Gallery, the latter being scattered with glamorous boutiques and connected with Milan's most famous shopping district, Via Monte Napoleone. Visitors will have the opportunity to go shopping in the most glamorous boutiques or admire the trendiest shop windows in Italy. The side streets S.Spirito, Borgospesso and S.Andrea, are peppered with antique shops, traditional workshops and art galleries. Via Borgonuovo leads to Brera Art Gallery, which cherishes one of the most important art collections in Europe.

After the tour of Milan's city centre, public means of transport, such as buses, street cars and underground, give tourists the possibility to reach further tourist and artistic attractions. Not to be missed are the Church of St. Simpliciano, which was erected in the IV century and still retains its original fascination, and Piazza Cavour, a crowded gathering place leading to the Public Gardens, which host the Planetarium, the Civic Museum of Natural History, the Modern Art Gallery of Villa Reale and Palazzo del Senato.  Via Turati, which flanks the gardens, leads to Palazzo della Permanente, which is the venue for interesting temporary exhibitions.

Via Dante leads to the Sforza Castle, the most representative example of Renaissance architecture in Milan. It is home to the Museums of the Castle, which in turn cherish precious collections of painting, sculpture and applied arts. Apart from being one of the most important green lungs of the city, the large park which surrounds the castle is home to the Civic Arena, the Aquarium, the Neoclassical Arch of Peace, which was erected to celebrate Napoleon, Palazzo dell’Arte, the seat of the Triennial Exhibition of Decorative Art, and Torre del Parco, which was largerly built of steel pipes.

Not to be missed are the Basilica of St. Maria della Grazie, a wonderful example of Renaissance art, the nearby cloister by Bramante and the refectory of the former Dominican monastery, which cherishes the famous fresco of the Last Supper by Leonardo da Vinci. A short distance from it is the Romanesque Church of St. Ambrogio, which boasts a richly decorated interior, while further south is the Basilica of St. Lorenzo Maggiore, the most representative example of early Christian architecture in Milan.

The lovers of nightlife flocking to Milan will have the opportunity to experience a remarkably wide array of fun and entertainment options. Cinemas, movie theatres, film libraries and an interesting cinema museum are able to suit even film lovers' most demanding requirements.

Brera is the heart of Milan's nightlife. It gathers three of the most important city theatres: Teatro delle Erbe, Manzoni Theatre and Piccolo Teatro, the latter being the first repertory theatre in Italy which was founded by Paolo Grassi and Giorgio Strehler in the post-war period. Scala Theatre proposes the richest calendar of opera performances in Italy, and also stages extraordinary concerts of classical music and enchanting ballets. Arcimboldi is one of the most recent theatres in the city, and it often arranges musicals, concerts and amazing shows and events which attract large numbers of tourists.

Those looking for trendy clubs, lively snack bars or glamorous discos will be spoilt for choice. Apart from Brera district, even Milan's famous navigli, which are crossed by artifical canals built between the Middle Ages and 1800 to suit both transport and defensive purposes, are scattered with trendy clubs and modern pubs and discos.