Famous all over the world for its alluring beaches and exciting night life, Rimini also cherishes an inestimable historic-artistic heritage.
The old town of the city abounds in outstanding monuments, churches and finds dating back to different Ages. Rimini is a city of ancient origins which has been settled since the Palaeolithic. In 268 BC, in an area that had previously been inhabited by Etruscans, Greeks, Samnites and Gauls, the Romans founded the colony of Ariminum.

It was seen as a bastion against invading Gaul and also as a springboard for conquering the Po Valley. 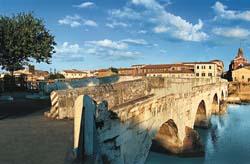 Northern Italy (Via Aemilia that led to Piacenza and Via Popilia-Annia which led to Trieste crossing Ravenna) and it also opened up trade by sea and river. Rimini, which drew the attention of many emperors, (Augustus, who did much for the city, and Hadrian in particular), was experiencing a great period in its history, embodied by the construction of prestigious monuments.

The tour of the city could start with the visit of the ancient Tiberius Bridge, which was begun under Emperor Augustus in 14 AD and then completed under Tiberius in 21 AD. Built in Istria stone, the bridge consists of five arches resting on massive pillars.

Crossing the river Marecchia (then known as Ariminus), the bridge marks the beginning of Corso d'Augusto, the heart of Rimini's city centre with its shops, small cafes and historic buildings. Corso d’Augusto leads to Piazza TreMartiri, where recent excavation works unearthed part of the ancient paving of the Roman Forum, and to Piazza Cavour, which was the seat of the fish and vegetables market during the Middle Ages.

The square is dominated by important historic buildings, such as Palazzo dell’Arengo, Palazzo Garampi and Palazzo del Podestà. The Galli Theatre in the background dates back to 1857. Piazza Cavour also hosts the wonderful Fontana della Pigna (Fountain of the Cone), which was built in 1543 by Giovanni da Carrara.

It is a triumphal arch situated at the end of Via Flaminia, one of the most ancient arches in the world. The merlons were added in the Middle Ages (10th century) under the Ghibelline domination.

Not to be missed is the Roman Amphitheatre, which was built in the 2nd century for seating people on the sloping area for the viewing of gladiator fights. Situated on the outskirts of the city, it had elliptical shape and the arena measured 73x44 metres, not far from the famous Flavian Amphitheatre in Rome, the so-called Colosseum. It could host up to 10.000 spectators.

Rimini's Amphitheatre was soon transformed into a defensive bulwark and, once incorporated inside the city walls, it also acquired military functions. In the Middle Ages it was also used as a Lazaretto. The remains of Rimini's Amphitheatre were unearthed in the ’60, when extensive excavation works took place in order to restore part of the building and use it 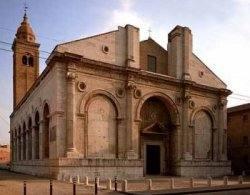 to host shows and events, as well as guided tours. Another symbol of the city is the Malatesta Temple, which celebrates a thriving period in the history of Rimini: when it became a Signoria under the Malatesta family from Verucchio in 1295.

Officialy entitled to St. Francis, it takes the popular name from Sigismondo Pandolfo Malatesta, who commissioned its reconstruction to the famous architect Leon Battista Alberti. St. Francis was originally a thirteenth-century Gothic church. In 1447, Malatesta called on Leon Battista Alberti to transform the building and make it into a kind of personal mausoleum, covering its surface and embellishing the interiors. Both the dome and the upper part of the facade were never built, as Malatesta's fortunes declined steeply due to the wars they waged against Federico da Montefeltro.

It is still possible to admire the twofold nature of the building, where the marble facade and sides contrast with the poor beams and hollow tiles of the covering. Not to be missed are Giotto's crucifix and the tombs of Sigismondo Malatesta and Isotta degli Atti the temple cherishes.