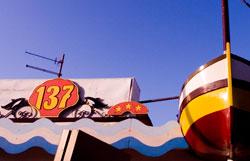 How can you find clubs, restaurants and hotels in Riccione? If you do not know the city and you are not familiar with maps and plans you could have some problems in reaching your hotel in Riccione.

A solution is provided by the sea front and the numbers of the bathing establishments, which can be easily seen from the beaches of Riccione and help people find hotels, clubs, streets and squares.

Next to the central area is the Harbour, which includes bathing establishments no. 78-95. Here is viale Ceccarini, the most elegant and glamorous shopping avenue of the city. A short distance from these beaches are elegant boutiques, cafeterias and clubs. Further down is the Alba area, bathing establishments no. 96-110, which is home to another famous avenue, Viale Dante, a glamorous pedestrian precinct hosting exclusive shops, boutiques and clubs.