Ravenna is renowned all over the world for its superb mosaics and artistic heritage dating back to the Byzantine period. It greatly prospered under Roman rule. In 402 AD Emperor Honorius transferred the capital of the Western Roman Empire from Milan to Ravenna.

The privileged position of Ravenna and its lidos made it possible to trasform the city into an important naval power: in 45 AD Emperor Augustus founded the military harbour of Classe, a strategic station of the Roman Imperial Fleet which provided control over the whole of the Eastern Mediterranean.

Ravenna achieved the height of its splendour and richness in 402 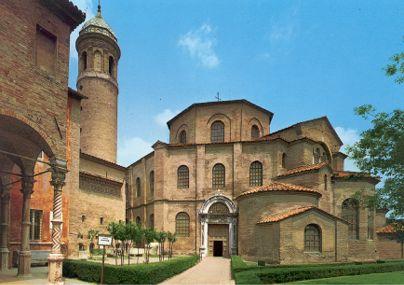 AD, when Emperor Honorius appointed it capital and the Church gained utmost power. Today Ravenna is the second most important ecclesiastic centre after Rome.

In the V century, lots of religious buildings were built: among the most important ones were the Imperial Palace and the Palatine Chapel. Collections of ancient weapons, archaeological finds and funeral urns, which were unearthed during the excavation works carried out around the area where these buildings stood, are cherished by the National Museum.

In the first half of the V century, Ravenna hosted Galla Placidia, the daughter of Emperor Theodosius. During this period, the Basilica of St. John the Evangelist, the Neonian or Orthodox Baptistry and the so-called Mausoleum of Galla Placidia were built. The charming Roman-Hellenistic mosaics used to decorate both the Baptistry and the Mausoleum are among the most ancient and beautiful ones in Ravenna.

However, Byzantine Emperor Justinian was fanatically orthodox and opposed both Ostrogoth and the Arian variety of Christianity. In 554 AD he invaded Italy and conquered Ravenna, which became the seat of Byzantine government in Italy. The most representative remnants of that period are the wonderful decorations of the Basilica of St. Vitale and St. Apollinare in Classe. The combination between the Byzantine and the different local styles gave birth to outstanding architectural and artistic masterpieces.

In 751 AD the Lombards succeeded in conquering Ravenna, thus ending Byzantine rule in Northern Italy. Even Charlemagne made three looting expeditions to Ravenna, removing a

vast quantity of Roman columns, mosaics and statues. Ravenna then became territory of the Papal States, which undertook a gradual land reclamation which totally changed the aspect of the city.

During that period, Ravenna was the seat of fierce fighting between Guelphs and Ghibellines.
In 1275, the De Polenta family established their long-lasting Signoria, and in 1316 they hosted the exiled poet Dante who completed the Divine Comedy right in Ravenna. Dante died in 1321 and was buried in a tomb annexed to the Basilica of St. Francis, where his funeral ceremony was held.

In 1780 Cardinal Luigi Valenti Gonzaga ordered the building of the Neoclassical temple which cherishes Dante's tomb. Local inhabitants call this temple, embellished by a flattened dome surmounted by a crown, “la zuccarira” (the sugar bowl). It hosts the famous bas-relief dating back to 1483 which depicts the poet while reading, as well as the oil lamp which hangs from the dome. Since 1908 the lamp, a gift from the Florentine Dante Company, has been fuelled with the oil Florence gives Ravenna during a ceremony which takes place every year on the nearest Sunday to the date when the poet died (14 September).

The current squares and main streets in Ravenna were restored in ‘700 and ‘800, but ancient buildings and new structures coexist in perfect harmony, giving the city a unique fascination.