Overlooking the Marecchia Valley 30 kilometres far from Rimini, San Leo is situated 500 metres above sea level, on the top of an impressive rock spur falling sheer to the underlying plain. The only way to reach this charming village is a narrow road carved out from the rock.

Those staying at a hotel in Rimini who want to discover the outstanding beauties Montefeltro cherishes won't miss the opportunity to visit this charming village boasting outstanding ancient monuments and a breathtaking view over the underlying valley and the surrounding hills. Situated just across the border of the provinces of Pesaro and Rimini, San Leo is a privileged holiday destination for those who stay at a hotel in Rimini and want to discover the beautiful hinterland situated a short distance from the Adriatic Coast.

The historic vicissitudes of San Leo, the ancient Mons Feretrius, started during the Roman 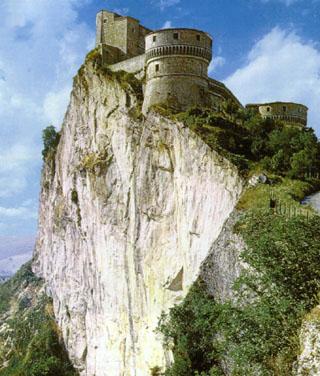 Age. Although the exact date it originated is unknown, during the 3rd century a first fortification was built on the top of a rock spur. At the end of the same century, Leone, who came here from Dalmatia together with his friend Marino, spread Christianity all over the territory.

The stonecutter Leone is regarded to be the founder of the city and is said to have built the originary shrine dedicated to the Assumption of the Virgin in the place where the Parish Church was then erected during the Carolingian Age. Situated just in the heart of the Medieval urban settlement, the Parish Church was later restored in the Romanesque style and was added the Cathedral (after the 7th century) named after St. Leone, which was subsequently restored in a Romanesque-Lombard style and provided with an adjoining Bell Tower.

The old town is a captivating small village: Piazza Dante Alighieri hosts the Romanesque Parish Church, the Cathedral and the Bell Tower, as well as beautiful Renaissance aristocratic residences, such as Palazzo Mediceo, the residence of Counts Severini Nardini, and Palazzo della Rovere.

Leaving the city centre behind, it is possible to climb to the Fortress, whose original settlement dates back to the early Middle Ages. The current structure of the fortress was designed by the acclaimed architect Francesco di Giorgio Martini, who was commissioned the works by Federico da Montefeltro in 1479.
The Fortress played a fundamental role for the surrounding area: built during the Renaissance to suit defensive purposes, it was later turned into a papal prison in 1630.

Between 1791 and 1795, the prison of San Leo hosted Giuseppe Balsamo, better known as Count of Cagliostro, who was convicted of heresy by the church for his profession of Mason, witzard, alchemist and healer. Cagliostro is still said to be one of the most fascinating and controversial personalities of the Enlightenment.