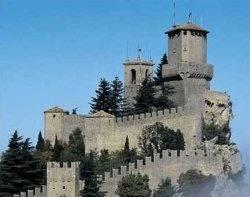 The most ancient republic in the world, San Marino overlooks the Adriatic Coast from the top of Mount Titano and is situated only few kilometres far from it. The history and traditions of this small republic date back to the Age of Diocletian, when the Dalmatian stonemason Marino settled here to flee the religious persecution of the Roman Emperor.

The Republic covers a surface of 61 square kilometres and is divided into nine castelli (castles), each one retaining its own history and local usages and customs. The old town is situated on the slopes of Mount Titano and features narrow streets and charming buildings leaning against the rock. The symbol of San Marino are the three towers which top Mount Titano, which can be reached through a rough path offering outstanding views over the Adriatic Coast and the valleys of Montefeltro.

Among the most characteristic squares of the old town are Piazza Sant’Agata, which is named after the second patron saint of the country and hosts the small and welcoming Titano Theatre, which dates back to the first half of 1900 and is decorated with the coats of arms of the Castelli and with pictures depicting the most important personalities in the history of the Republic, and Piazza Titano, which is the seat of the State Museum which in turn cherishes important evidences dating back to the ancient history of the Republic.

Garibaldi, who sought shelter here to flee Austrian domination in 1849, is honoured by a monument in Piazza Garibaldi. Piazza della Libertà hosts the beautiful Palazzo Pubblico, the official government building erected at the end of 1800 by Francesco Azzurri, the current seat of the republic's main administrative and institutional bodies. The square overlooks the surrounding landscape and boasts outstanding sceneries and colours.

The Basilica of St. Marino, situated beneath the towers, was built in 1825 by Antonio Serra over the foundations of the ancient pre-Romanesque Parish Church. According to the documents, the ancient building was one of the first Christian monuments to be erected in Italy; only the font withstood and is now cherished by the State Museum. The current facade of the Parish church of St. Marino was realized in the Neoclassical style and is characterized by an outstanding staircase and a pronaos made up of Corinthian columns. Inside are paintings dating back to ‘600 and ’800 and the mortal remains of St. Marino cherished by an urn situated under the high altar. 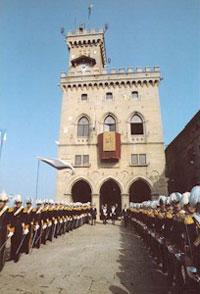 The narrow, twisting lanes situated around the Basilica are among the most ancient in the country and are lined with fine stately homes and manor houses. Not to be missed are the facades of many public buildings and ancient Medieval residences, which were largerly built of the typical stone from San Marino, characterized by light colours which take on warm shades under the sunlight. The tradition linked with stonecutters, which was inaugurated by St. Marino more than 1700 years ago, still retains its fascination and is carried out by some local craftsmen.

Further religious buildings worthy of note are the Church of St. Francis, the most ancient building in the Republic which was built in 1361 and now hosts the Museum of St. Francis and the National Art Gallery, and the Church of Borgo Maggiore, an outstanding building provided with a peculiar roof and splendid interiors which was erected in 1961-66 by Giovanni Michelucci, one of the most important Italian architects of 1900.

To spend a holiday in the Republic of San Marino allows visitors to enjoy a magic atmosphere. On September 3 the traditional parade of Crossbowmen takes place, followed by the republic's representatives, the armed forces and the band. Ancient times are celebrated on the occasion of the famous “Medieval Days”, when the old town revives past vicissitudes through period costumes, games, competitions and shows, real historic recollections which take place in summer along the streets of the city centre and the charming Cava dei Balestrieri (Quarry of the Crossbowmen).

Not to be missed are traditional small shops which follow one another along the streets of the old town and sell every kind of item, from traditional specialities and spirits up to local handicrafts and curiosities.